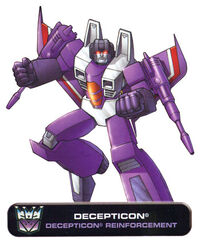 "Air superiority is the Empire's key to ultimate victory!"

Calling Wrath dedicated would be like calling molten lava lukewarm. His only reason for being is to ensure and uphold Decepticon air superiority. He is completely devoted to Decepticon Aerospace.

Although Wrath's primary role is for aerial assaults, his desire to plan out his attacks make him good as a reconnaissance agent. He may not be the stealthiest Seeker in the business, but he knows how to get into an area, do what he needs to, and get out. His knowledge of robotic engineering has allowed him to create his own semi-intelligent reconnaissance drone, in the form of a cybernetic falcon. Wrath will often send Skysight ahead to scout out the area quietly, or designate targets. He can remain in direct communication with Skysight for a distance of 50 miles. Once this intelligence has been collected, Wrath can bring his arsenal to bear with lethal efficiency. To accomplish this, he carries a wide variety of ballistic weaponry, from machine guns to autocannons. Wrath transforms into a twin-engine A-10 Thunderbolt I, designed to provide close air support for ground forces by attacking tanks, armored vehicles, and ground targets with limited air defense capability. His A-10 form was designed around a heavy rotary Gauss-Cannon that forms his aircraft mode's primary armament. Wrath's hull incorporates over 1,200 pounds of armor and was designed with survivability as a priority, with protective measures in place which enable him to continue flying even after taking significant damage. Wrath typically flies at a relatively slow speed of 300 knots (350 mph; 560 km/h), which makes him much better for ground-attack than fast fighter-bombers who often have difficulty targeting small and slow-moving targets.

Wrath's original Earth altmode was a triple-engine F-15 Eagle, designed for operation in both atmosphere and space, with a top speed of Mach 5. In 2007 Wrath was rebuilt into a slower-but-tougher A-10 Thunderbolt II. In 2013, all Earth-assigned Seekers were brought to Cybertron to help defend Polyhex.

Wrath was created and played by Dean.