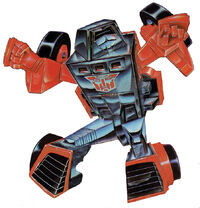 Windcharger is the fastest Autobot of them all - for very short distances. He can go from 0 to 60 mph in Pontiac Firebird Trans Am sports car mode in almost no time whatsoever, and that makes him useful in certain situations requiring very fast, very decisive action. His personality is similar: what Windcharger decides he decides immediately. He glances at something and moves, seldom bothering to ask questions. This may be because his attention span isn't particularly long. He becomes instantly enthusiastic and a few hours later loses interest. His impatience often diminishes his usefulness in lengthy, complex courses of action.

In robot mode, Windcharger's arms act as the positive and negative poles of a magnet. He can cast powerful magnetic fields at distances up to 700 feet. He can levitate a 10-ton block of steel at that distance. He can attract objects that are affected by magnetism toward him or repel them. At closer distances he can rip them apart.

If overused, his magnetic ability uses up tremendous amounts of power. Hence, he must be careful in using it. Unfortunately, Windcharger is seldom careful and so is prone to debilitating burn-outs.

Windcharger was part of the initial crew of the Ark, on a mission to seek out new energy sources to fuel their struggle with the Decepticons. After awakening on Earth over four million years later, Windcharger participated in the unsuccessful Autobot counter-attack on the Decepticon siege of Sherman Dam, which was being run at dangerous capacities to fill the Decepticons' energon cubes.

Fire on the Mountain

Of all the other Autobots, he seemed to be closest to Brawn, judging from their excellent teamwork and friendly banter while journeying with Skyfire to investigate a Decepticon super-weapon in Peru. When Windcharger was injured during the battle later in that mission, Brawn was quick to swear vengeance for the small 'bot.

Though rarely given the chance to show off his impressive power over magnetism, Windcharger did manage to make use of it twice during Megatron's attempt to bring Cybertron into Earth's orbit: first, to locate the Decepticon base for the rest of the rescue team when they were operating underground, and then again to help pull Bumblebee out of a really deep hole.

Windcharger remains with Optimus Prime's forces on Earth, often on patrol should Decepticons pop up in unexpected places.

On the MUX, if Windcharger is near ferrous materials (say, on Cybertron or in an Earth city), he can use his magnetics to fire himself like a guass charge, accelerating himself even faster.

Windcharger is available for application.

In the Shattered Glass universe, Windcharger is a cruel, sadistic killer who counts Frenzy as one of his many murders on the road to Iacon.