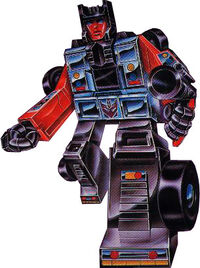 Look out, motorists! The road hasn't been built yet that's big enough to handle Wildrider! Some of his fellow Stunticons attribute his reckless behavior to be a calculated attempt by Wildrider to enhance the atmosphere of fear he tries to create in his role as a terrorist. But those who know him better realize it's not an act - he really is that nuts! As his fellow Stunticon Breakdown puts it, "When he's driving, I'd rather take a plane."

Wildrider can reach 250 mph in Ferrari 308 GTB sports car mode, and has amazing maneuverability. In robot mode, he uses a scattershot gun, which can spray a fifty-square yard area with searing, ripping laser beams at a distance of ¼ mile. With it, he can demolish a small 5-story building in two minutes. He combines with his fellow Stunticons to form the giant robot "Menasor."

Wildrider fears quiet. He suspects enemies are lurking, ready to pounce on him, if all he hears are the sounds he produces himself. This gets him very nervous and hampers his effectiveness. In car mode, he is prone to tire blow-outs due to the crazy way he drives.

When the Autobots got involved in the Europa 2000 race, Megatron needed them removed from the playing field to stop any interference with his plans to steal the Pearl of Bahoudin and an experimental car engine from the race's top driver. He had the Stunticons intercept and eliminate the Autobots, and Wildrider helped disable Sunstreaker, Sideswipe, and Smokescreen with his fellow Decepticons. Bluestreak refused to just lay down, though, dodging the Stunticons' ramming attacks and jumping atop Wildrider's hood. The crazy Stunticon eventually shook Bluestreak off by just crashing hood-first into a mountain at over 150 mph.

In his next scheme, Megatron charged the Stunticons with bringing him the last key items for his new molecular disrupter cannon. Wildrider and his partner Breakdown broke into an optics laboratory and robbed a scientist of his experimental lenses for Megatron's weapon. Upon their escape, though, the Stunticons ran into Inferno, Hoist, and Grapple blocking the road. Wildrider took the challenge and managed to just miss hitting the Autobots with his crazy driving, and dodge the missiles fired at him by Inferno. He tested his luck on a second drive-by, though, and was blasted into submission by Hoist. The Stunticons were all captured and imprisoned inside the Ark, while several Autobots employed camouflage paint to disguise themselves as the Stunticons, in a Trojan Horse ploy to find out what Megatron wanted with the components. The Autobot warrior Windcharger took Wildrider's place. After the Autobots took off, however, Breakdown managed to free his fellow Stunticons, and they all joined up to form Menasor, easily smashing through the remaining Autobots guarding them. As Menasor, they returned to Megatron and attempted to convince him they were the true Stunticons. Though ultimately successful, the Autobots had made alterations to the stolen components which caused Megatron's weapon to blow up in his face, and the Decepticons beat a hasty retreat.

Wildrider currently on Earth, and regularly terrorizes human drivers all over the globe.

Wildrider is available for application.