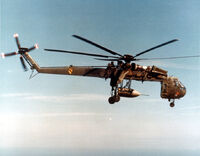 WIDGET is a born scrounger. Originally created to assist in Decepticon recycling efforts, she broke programming and started a preemptive salvage operation, stealing from Autobots and Decepticons alike and hoarding her finds, occasionally selling surplus on the black market. This went on for several vorns until one poorly planned raid landed her in the hands of Decepticon Internal Security, who offered her a deal: join them, assist in catching other thieves such as herself, and live to tell the tale. She was later trained as a medic to increase her value to the Dominicons. In robot mode, Widget is a fearsome fighter, perhaps to make up for her relative vulnerability in Sikorsky SkyCrane mode, where her strength is better used at hauling loads of up to 20,000 pounds.

A lanky twenty-seven foot tall black and yellow femme with rounded hazel optics and a look on her face that says she's seen more of this universe than she wanted to and likes very little of it. On her back are twin rotor-swords, heavier and less refined looking than most femmes of her size would carry. Despite her slimness, she has a certain presence and strength to her that suggests she's not someone to be trifled with.

Member of a rather easygoing (for Decepticons) outpost of misfits into a well-trained and deadly team by Illarion.

In 2015, Widget witnessed a battle between Knightmare and Megatron. When Starscream intervened, the Dominicons merged for the first time to form Dominicus. Megatron, however, showed his even greater power as he dispatched the combiner with one shot of his anti-matter cannon. After that, the Dominicons left the Decepticons and took off on their own.

In 2018, the Dominicons became defending neutrals from Decepticon aggression, including defending the industrial town of Valvolux.

In 2022, Widget helped repair Illarion after she got in a fight with Motormaster and Razorclaw.

Member of the Dominicons, an OFC would-be gestalt on TFU. She transforms into a black and yellow Sikorsky S-64 Skycrane.

May 18 - Decepticons and Energon

I was approached by the Decepticon Ambassador Vizier to request, I quote

-- "The Empire is in need in need of energon generators, perhaps half a dozen in various sizes. Nothing untoward, rated for consumption, not military production. One personal sized, the rest for at least a small community. We have come to recognize the superiority of Valvolux production."
-- Endquote
The Decepticons aren't exactly the type to want to outsource energon gathering and production, much less have generators made. So something's up. Assigned Takedown to look into things. Told Vizier that I'd look at the proposal and get bak when I'd had a chance to review it. Keeping the rest of you in the loop.

This character is available for application.