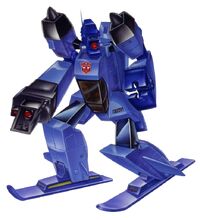 Whirl is one Autobot who really loves his job. As a helicopter, he doesn't just fly, he careens across the sky in what appears to be a wild, joyful dance. But the crazy patterns he spins and weaves in flight only disguise the method to his madness. He calculates that an enemy would be far more terrified by someone who appears to be insane than by a purely rational opponent. Indeed, he is right. One single, lunatic dive of Whirl's will often send Decepticons scurrying for cover even before he starts firing at them. "An attack of insanity can be just as effective as an attack by a proton bomb," says Whirl.

As a helicopter, Whirl can fly at a speed of 400 mph. He has a range of 16000 miles. His manoeuvrability is amazing -- he can fly at virtually any angle except upside down, and even that he can achieve while doing loops. He packs four incendiary-shell cannons and a high-energy photon beam rifle. He has enormous strength in robot mode and carries a hand-mounted null-ray module that shields him from any energy beam directed at him, and a leg-mounted paralyzo-box that injects a powerful, disabling fluid when bought into contact with other robotic life.

Being reckless, Whirl is prone to disabling himself by damaging his rotor blades.

Canonical/Pre-MUX/Theme History: They really should have just let him be a watchmaker. So many problems and issues and bad decisions and events could have been avoided if the Functionist Council had just let it go. Whirl was talented, intelligent, and they just wouldn't let it go that such a talented flier had gotten permission to step outside his role and was so good at it. They arranged it all. The criminals threatening his business, being forced to work for the corrupt Senate, the empurata, his self-loathing turning into abuses of police power, his arrest for same...

When the War started he was brought on quickly. The quote "forgiveness as a weapon of war" sums it up nicely, and it was way better than having him as a Decepticon. He started as a flight instructor under the name "Jetstream" where he turned out great fliers and abuse victims. Joining the Wreckers was almost inevitable, as were the war-crimes and his refusal to turn anyone in for them, or say anything about them. One of the most telling things about his history is that, to date, he won't ask, and indeed, will refuse to have his empurata mutilations undone.

During the Ark crew's four-million-year sleep, Whirl was active on Cybertron as one of the Wreckers.

MUX History: Whirl is usually based on Cybertron as one of the Wreckers. In 2014 he transferred to Earth.

In the Shattered Glass universe, Whirl is believed dead. He was a member of Rodimus's Wreckers until reported killed in Praxus-Delta.