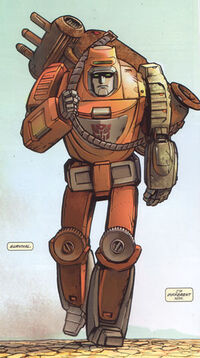 WHEELIE is an intense young survivalist, able to withstand harsh environments and survive for long periods of time without support or supplies. Too much time alone, however, has adversely affected his personality, and he has taken to making up rhymes, an irritating habit he can't seem to drop in the presence of others. Wheelie generally comes across as friendly if a tad annoying, but he is extremely cunning, and can be quite sneaky when necessary. Wheelie was built small to conserve energy, and he makes up for it by fighting dirty. In robot mode, he possesses wrist-lasers for emergencies, but prefers attacks that don't drain energy. He uses a three-bladed knife and a sling which hurls fire stones when he must attack his enemies or defend himself. In his cybercar mode, he is very fast and highly maneuverable, and is known for performing stunts and showing off. An unstable loner, Wheelie makes friends easily, but can't really be fully trusted. He fights only when he's under attack and has to defend himself, and is likely to leave a comrade to die if it means saving his own skin.

WHEELIE is the "wild boy" of Quintessa - an Autobot youth lost when his ship went down, the only survivor of his party, staying alive by cunning and stealth and fearlessness. He speaks in odd, rhyming sentences and despises the Sharkticons and Quintessons, who are his mortal enemies.

Since the movie isn't canon on the MUX, Wheelie got to Earth by stowing away in a Quintesson tradeship, and never developed a close relationship with the movie characters.

In 2016, Kup, Wheelie, Arcee, Sit-Com, and Phase-Ar travelled to Goo, where they discovered the tracking station had been destroyed by death crystals. The Autobots and Junkions were attacked by Astrotrain, and Wheelie was nearly killed, revealing the Decepticons had the crystals now. Kup revealed foreknowledge of the crystals, and explained he’d encountered them before, and had been held prisoner on the source world, Dread.

On the MUX, Wheelie is portrayed more like a crazy savage than an annoying kid.

Wheelie was temped by Snowfyre in 1996.

Wheelie is now available for application. In the meantime, he's played by Bzero.

In the Shattered Glass universe, Wheelie is a savage warrior king.