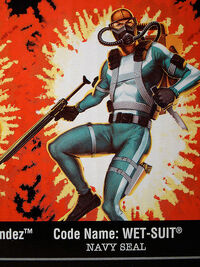 It is said that SEALs are the guys who were too nasty to be Airborne Rangers or Marines. That certainly qualifies in the case of Wetsuit. He has been characterized as being "175 pounds of mean on the hoof" and is definitely not known for his social graces. He is not the type who goes over very well at the Chaplain Assistants' Social Tea, but he is exactly the guy you want behind you when you run into a gaggle of Cobra Eels in a shallow mine field. The Navy keeps their SEALs locked up below decks until something bad becomes worse. That's when they get dumped in the soup on a rubber raft with a knife, a gun, and all the ammo and explosives they can carry. Wet-Suit may just as well be the roughest one of the bunch. He's wild and unruly -- but he's simply the best at what he does. His problems may lie in the fact that he loves his work a little too much. His specialty is underwater demolitions, and he tends to use too heavy a hand when asked to blow up something. Though he may be mean to the bone, he's also quite bright, being well-read in both the classic and the standard texts of military tactics. Pretty amazing considering that the level to which he has developed his toughness would seem to indicate full-time occupation. He is often at odds with Leatherneck, arguing over which branch of the military is better.

Growing up in Myrtle Beach, South Carolina, Wetsuit knew from an early age he wanted to join the Navy, and enlisted upon his high school graduation. He eventually applied for SEAL training, was accepted and completed arguable the military's toughest training program. Like any other SEAL, Wetsuit gained a reputation for being tough and mean, though many instructors considered him the toughest and meanest. What many overlooked was Wetsuits sharp mind which was easy to miss underneath his tough and abrasive personality. He was also trained in underwater demolitions. Seeking even greater challenges, Wetsuit signed on to the G.I. Joe team.

On his first mission for the team, he accompanied Hawk on a mission to rescue Snake-Eyes from Cobra Island, which led to a fierce battle in the waters around the island. He served on a few more missions for the Joes before the team was suspended following the Battle of Springfield. Wetsuit later took part in a mission to recover Soviet Naval Captain Bulgakov when the high ranking officer defected to the United States. As the other Joes distracted the Oktober Guard, Wetsuit and fellow SEAL Torpedo snuck on-board the Russian ship and helped retrieve Bulgakov.

Wetsuit later joined in a near-disastrous mission into Southeast Asia when the Joes were betrayed by the CIA agent who had sent them on the mission to capture a Soviet agent. Shortly after, Wetsuit and Torpedo again went up against the Oktober Guard, this time to investigate the Guard's mission on Cobra Island, contending with a Cobra BAT in beserker mode and a hungry crocodile. Wetsuit was one of the few Joes who did not take part in the Cobra Island civil war, and went underground when much of the team was arrested by a corrupt group of Generals, who blamed the operation's failure on Hawk and General Hollingsworth. Wet-Suit joined with the other renegade Joes to help rescue their commanders and clear their name.

Wetsuit served on the team for years until it was shut down in 1994. In the years that followed, Wetsuit was assigned to the Navy base in Pensacola, Florida, where he met and married his wife, Belinda. She seemed to have a calming effect on her husband, and WetSuit's mean disposition softened somewhat, though the SEAL maintained his toughness in the field.

Wetsuit was reinstated when the team was reformed. He is a reserve member of the team, and was called back into active service during the Great Flood of 2011. In August of 2013 he was assigned to SEAL Team 9, a new team operating Worldwide out of Coronado, California.

Wetsuit is available for application