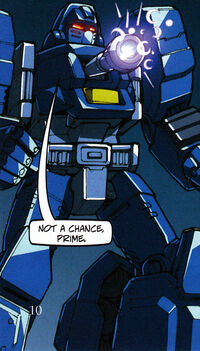 Most Autobots find WARPATH’s murdering skills quite impressive. Certainly, no one would argue with his sharpshooting ability, as he can hit a hex-nut at a distance of 1.5 miles with a shell from his gun. However, he's less concerned with showing off than with the death of each and every enemy of the Autobots. But his boisterous, loud-mouthed personality makes him welcome company and his raucous sense of humor can bring cheer to the gloomiest situations. Nothing seems to upset him except boredom... if he goes too long without killing anybody, he gets restless. He much prefers being in the thick of battle, covered in dents and scratches and up to his gun barrel in the spilled mechfluid of his victims.

In his Cybertronian H-tank mode, WARPATH can travel over the roughest terrains at speeds of up to 30 mph, and his thick vanadium-steel armor can withstand all but the toughest blows. He has a variety of shells available to him in tank mode: explosive, thermal, cryogenic, acid, and sonic. He has great strength in both modes, but is virtually helpless if upended in tank mode, and his movements can be severely hindered it his treads are damaged. He's slow, but his firepower and toughness help compensate for this deficiency.

Warpath (ZING!) had a habit of (BLAM!) interjecting his speech with (WHAMMO!) onomatopoeia. Whether this was a programming feature or personal choice is unknown. His fellow Autobots seemed to tolerate it.

In spite of his ... odd habits, Warpath managed to secure a position in the Elite Guard. While protecting Emperor Prime, Warpath fell under the sway of the Old One, and continued to follow him secretly, even in exile, waiting for the right moment to help Trion rise to prominence once again.

As part of Remote Patrol Six, Warpath has been assigned guard those studying the Plait Expanse. When the Remote Patrol Six encountered the Junkion pirate ship V'ger in orbit around Cybertron in 2012, it fired on the V'ger, disabling it, and then sent in a boarding party. Met with heavy resistance by the Autobots and Decepticon aboard, however, the RP6 was forced to retreat.

With the return of Alpha Trion as Autobot advisor, Warpath has become more overt about his support for the Old One.

Warpath is not a in the MUX version of the Shattered Glass universe.

Remote Patrol Six is named such because they are the sixth group sent out on patrol (the first five have been killed), not because they have to maintain six members at all times.

Of the Six, Kup, Camshaft, and Warpath are secretly working for Alpha Trion. Downshift is an undercover agent of the Autobot Secret Police, spying on the members of the Six for their suspected seditious ties. Powerglide and Sandstorm are comparatively innocent, and therefore very likely to die in the inevitable crossfire.

Warpath is open for temping.