This page is for the heroic, and apparently departed from the TFU-Universe Autobot minibot. For his evil Shattered Glass Remote Patrol Six counterpart, see Warpath (SG). 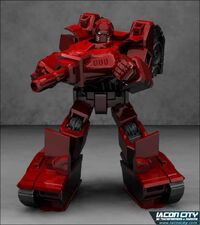 WARPATH thinks he's a lot more impressive than his comrades do. Certainly, no one would argue with his sharpshooting ability, as he can hit a hex-nut at a distance of 1.5 miles with a shell from his gun. It just seems that he's more concerned at times with showing off than with the welfare of the Autobots as a whole. But his boisterous, loud-mouthed personality makes him welcome company and his raucous sense of humor can bring cheer to the gloomiest situations. Only one thing seems to upset him: any small nick or scratch to his gun barrel. He's both very proud and very vain about his weapon, to the point that if his gun ever suffered anything as big as a dent, his comrades fear he might be too depressed to talk for a month! In his M551 Sheridan tank mode, WARPATH can travel over the roughest terrains at speeds of up to 30 mph, and his thick vanadium-steel armor can withstand all but the toughest blows. He has a variety of shells available to him in tank mode: explosive, thermal, cryogenic, acid, and sonic. He has great strength in both modes, but is virtually helpless if upended in tank mode, and his movements can be severely hindered it his treads are damaged. He's slow, but his firepower and toughness help compensate for this deficiency.

Warpath (ZING!) has a habit of (BLAM!) interjecting his speech with (WHAMMO!) onomatopoeia. Whether this was a programming feature or personal choice is unknown. His fellow Autobots seemed to tolerate it.

Warpath arrived on Earth during the initial impact of the Ark into the planet. He had been present when the Ark crashed onto prehistoric Earth during the encounter wih the Nemesis, but due to being in the more heavily-damaged Ark belowdecks, he was not recovered and repaired for almost a year.

Warpath's first mission on Earth was when Megatron created a remote-controlled duplicate of Optimus Prime to lead the Autobots to their doom. Unfortunately, Warpath did little more than get shot by a fake Starscream.

Warpath later accompanied Optimus Prime and the Autobots to Dinobot Island, where he first demonstrated his zest for combat and unique style of speech. He also had the first of several battles with his opposite number, the Triple Changer Decepticon tank, Blitzwing.

BLAM! KAPOW! He was one of several Autobots who defended the Ark when the Heart of Cybertron-powered Megatron attacked. Warpath rolled toward the Decepticon leader in tank mode, firing his shells, but was blasted by Megatron's destructive energy lightning.

Accompanying Perceptor and Beachcomber on a geology expedition, Warpath managed to get in some (ZOW!) action when Blitzwing and the Coneheads staged a surprise attack. He and Blitzwing engaged in Tank Wars again, but the fighting got so furious they buried each other in sand for awhile. It was anyone's game until Thrust found a pool of electrum and became invincible. Even a hot and cold mix of Powerglide's thermal beam and Warpath's cryo-shells couldn't break the Decepticon warrior. Warpath was forced to reluctantly sound the retreat, tunneling through the mountainside to make their escape.

On one occasion, Warpath and Hoist were chasing a small group of Decepticons led by Starscream, and ended up passing through the Dragon Mound and into 542 AD. The Autobots and Decepticons took opposite sides with a pair of warring knights, and Warpath allowed the Red Knight to ride him in joust against Sir Wigend du Blackthorne's champions, Rumble and Ramjet. (HIYAH!) They successfuly rammed Ramjet, caving in his nosecone and forcing the Decepticons to fall back on the ol' "grab a hostage and run" trick, taking the Red Knight's daughter Nimue captive. Warpath led the charge against Blackthorne's castle and, with their siege tower destroyed by some of Starscream's gunpowder barrels, he and Hoist served as makeshift ladders for their allies to breach the castle walls. After thwarting Starscream's plans to rule the 6th century, they enlisted the aid of a local wizard to get back to the 20th century.

When the Morphobots took over a valley on Earth, Warpath and Ironhide did their best to blast through using a variety of shells and liquid, but it took (POW!) Blaster and some (COWBELL!) tunes to really get them out of the way.

When his Autobot friends were kidnapped, Warpath was eager to go and (BAM!) kick some Decepticon hide. He was distraught when Optimus Prime went to deal with it himself. Prime Target He got his time to shine when he popped up on a movie studio one day, and was hired by the director with the other Autobots to be his new stunt vehicles. Unfortunately, the work was less than glamorous as Warpath wound up with a (ZING!) horrible pain in his neck and then, shocked by the director's attitude, decided to call it quits. Despite this, he was willing to return for a starring role in the new picture Attack of the Alien Robots, where he was confused by the lack of real firepower, couldn't believe the reliance on special effects, and flubbed one of his lines. Warpath didn't enjoy working on the movie and went back to being a full-time Autobot soldier, cheering for Hoist when he made the same decision. (CLAP!)

Late in 1985, the Autobots plotted to capture the Stunticons to discover the reason behind their high-profile thefts. Tracks and Warpath were assigned to take down Drag Strip and Dead End on a beach. Warpath quickly disabled Drag Strip with a few well-placed explosive shells, while Tracks blinded Dead End with his black beam gun. Unable to see, Dead End drove right into Warpath, who (BAM!) crushed the Decepticon with a single punch that went straight through his roof.

In 2016 Americans, Autobots, and Russians traveled to Benzheen to try to win a tank contract there. During the trial, Benzheen was attacked by forces from nearby Trucial Abysmia. The combined Autobot/G.I. Joe/Russian team drove the Trucial Abysmian forces back from the Benzheen border, although the Benzheen government was ultimately overthrown from within and a new pro-Abysmian military government was formed.

In 2017 Warpath was stationed aboard the deep-space salvage vessel Conrad. He was the last to survive a confrontation with the newly-awakened Manticide.

Warpath is one of the tougher Mini-Bots, and is easily capable of taking on full-size opponents.

Warpath was played by SpikeWitwicky in Flashbacks, and by anhert for a number of months, but has been open for application since March of 2008. Shebakoby temped Warpath as if 2016. SpikeWitwicky played him for his death in 2017.