This page is for the heroic Decepticon interrogator. For his evil counterpart, see Vortex 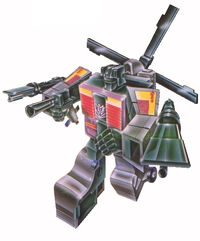 Vortex always gives you a ride to remember - in your nightmares! He takes an evil, cackling delight in trapping Autobots inside him and taking them on a spinning, dizzying flight of death-defying aerial stunts. As the Combaticon interrogator, he finds it an extremely effective - and enjoyable - way of doing his job. Autobots are easy prey to his techniques: Vortex grabs them off the ground, lifts them in the air and attempts to coerce them into divulging secrets. When Vortex is finished with the Autobots, he lets them plummet to the ground. A free ride from Vortex is definitely not worth the price.

In Kaman Aerospace SH-2G Super Seasprite helicopter mode, Vortex can attain a speed of 300 mph. His range is 1200 miles. He can whirl his rotor blades fast enough to create wind funnels that spin at speeds of 200-300 mph, powerful enough to lift a locomotive off its rails. He can suspend himself in the air in almost any position, which allows him to direct these funnels anywhere he wants. In robot mode, he uses a semi-automatic glue gun. It shoots capsules of highly adhesive liquid that will cement anything it hits to anything its target touches. Vortex combines with his fellow Combaticons to form the giant robot "Bruticus."

Although Vortex's wind funnels can be a devastating weapon, its use reduces his maneuverability and leaves him vulnerable to attack. It also subjects his rotor blades to extreme stress and possible metal fatigue and fracturing.

Cyclonus recently asked Vortex's advice on how to deal with the renegade Decepticons.