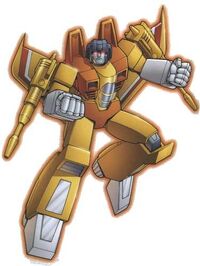 VALOUR demonstrated incredible bravery every place but the battlefield. Although he gave lips service to the cause of stopping the Autobots, he mostly stayed with the Decepticons because he is too afraid of what would happen to him on his own. He supported his partner Ingenue's ruthless tactics as long as it involved hitting the enemies from far away and then retreating quickly before they could counter-strike.

In robot mode, Valour was armed with dual multi-function arm-cannons and a powerful energy-sabre. He transformed into a Cybertronian tetrajet, capable of reaching speeds in excess of Mach 2.5. He cared little for authority or discipline, and would far rather be at the pub on Cybertron telling exaggerated tales of his exploits than on Earth mixing it up with the Autobots. He just wished the war would end already so he cound hide out and work on his fencing skills in peace, without the danger of actual opponents.

Valour joined the Decepticons out of fear of being killed by Autobot marauders. He felt there were safety in numbers, and had become very good at avoiding actual combat missions.

When the TP began, Valour was preparing with the other Decepticons to sabotage the Ark's launchpad, but found a way to get out of the actual attack. He's avoided an Earth-altmode retrofit since he was trying to avoid being deployed, which so far he's achieved. However, with Cybertron overrun by Junkions, he now regrets that choice, and is currently hiding in the subbasements of Darkmount, hoping the Junkions will just give up and go away.

In 2013, Valour was assigned to the Mayhem Suppression Squad, against his numurous protestations that he was unworthy of the honour.

In 2016 Valour was assigned to Decepticon Shuttle <Seizer>, to make a energon run to Decepticon City on Earth. The shuttle was intercepted en route by the Autobots, and although Valour begged for his life, he was killed by Emperor Prime.

Val originally started out as a character on Transformers: Lost Years, and his time there has been incorporated into his backstory at TFU. This mirror version of him was played by his creator, Bzero.

Mirror Valour was created and played by BZero.