View source
The name or term Valour refers to more than one character or idea. For a list of other meanings, see Valour (disambiguation). 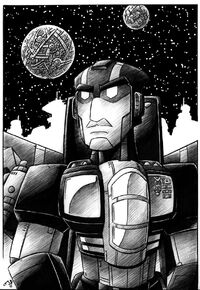 VALOUR is a career military officer, and is almost fanatically devoted to the Decepticon cause. He'd lay his life down in a microsecond to defend any of his Decepticon comrades, whether he likes them personally or not. He fights with great skill, battling Autobots for the good of Cybertron. He bears no ill-will towards the humans of Earth, but considers putting their needs over Cybertron's to be treason against his homeworld. Valour is armed with dual multi-function arm-cannons and a powerful energy-sabre. He transforms into an F-15E tactical fighter jet, capable of reaching speeds in excess of Mach 2.5. Almost insufferably polite, Valour can be rigidly conventional off the battlefield, impressing his superiors with his authoritarian nature, but leaving many Decepticons unimpressed with his high-minded morals. Although an inspiring battle commander, his squeaky-clean image impedes his social life with the Decepticons. A born warrior, Valour takes it all in stride.

Valour was built for war. A graduate of the Cybertron War Academy, he immediately signed up for the Decepticon cause, becoming one of Shockwave's elite guard during Megatron's long 4-million-year absense. After the Autobots on Cybertron were seemingly defeated, Valour retired and entered politics, eventually becoming governor of Polyhex. However, when Megatron awakened and the war resumed in earnest, Valour rejoined Decepticon Aerospace, eventually securing a rebuild and transfer to Earth.

Valour came to Earth in January of 1999. Val is involved in Decepticon City security, and sometimes served as Regent of Earth when Megatron was off-planet. In 2007 he took over governorship of Decepticon City and command of the Earth forces.

During the Dweller TP, Valour helped round up infected Constructicons, and tried unsuccessfully to deny Hubcap spacebridge access from captured Polyhex. In 2013 Plunder stole a cog from Valour while he was injured, and when he returned it he told Valour his discovered a flaw in his systems. This has created concern with Valour, which ate at his concentration and confidence until Starscream analysed his systems and determined he was fine.

In 2013, all Earth-assigned Seekers were brought to Cybertron to help defend Polyhex.

When Megatron was badly injured by death crystals in 2016, Starscream again assumed command of the Decepticons, and named Valour temporary head of Decepticon Aerospace.

In February of that year, Valour led an attack on the Three Gorges Dam in China.

In 2020, Valour assisted Cyclonus on an attack on Garrus-1.

In 2021, Valour lead a strike against Ibex, but was defeated by Grimlock and Optimus Prime. He was later captured by the Destrons.

In Bot World, Valour is one of the few to still carry a torch for Megatron’s vision of a Decepticon alliance. Nearly alone in Polyhex with the remnants of Megatron’s forces, Valour’s efforts to reunite the Decepticons have met with continuous defeat as Cybertron’s warlords are every Con for himself. Lately, Valour has had to focused on not letting Polyhex be overrun itself, as his labors to unite Cybertron has led others to perceive him as soft… and therefore ripe for takeover.

Valour was once a young officer with dreams of a universe united under Decepticon rule. Now, however, he’s found actual governance to be beneath him. The constant petty rebellions grate on his nerves, and by this point he’s ready to just pull out and nuke Earth from orbit. As his boredom increases, so does his hatred of the people of Earth. Any chance he has, he takes out on the people under his watch, hoping for the day he can leave this mudball behind and join another campaign of conquest.

In the Cobraverse, Valour came to Earth in 1999 to help rescue Decepticons that had been turned into mindless drones. To disguise himself he was rebuilt into a Hurricane VTOL with a holographic Vapor pilot.

In the Joeverse, Valour came to Earth in 1999 to stop the Autobots from working with G.I. Joe. To disguise himself he was rebuilt into a Conquest X-30.

Valour was created and is played by BZero.