The United States Navy (USN) is the naval warfare service branch of the United States Armed Forces and one of the seven uniformed services of the United States. The U.S. Navy is the largest in the world; its battle fleet tonnage is greater than that of the next 13 largest navies combined. The U.S. Navy also has the world's largest carrier fleet, with 11 in service, one under construction (two planned), and one in reserve. The service had 328,516 personnel on active duty and 101,689 in the Navy Reserve in January 2011. It operates 286 ships in active service and more than 3,700 aircraft. 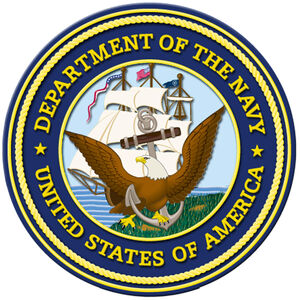 The Navy traces its origins to the Continental Navy, which was established during the American Revolutionary War and was essentially disbanded as a separate entity shortly thereafter. The United States Constitution provided the legal basis for a military force by giving Congress the power "to provide and maintain a navy".

Depredations against U.S. shipping by Barbary Coast pirates in the Mediterranean Sea spurred Congress to employ this power by passing the Naval Act of 1794 ordering the construction and manning of six frigates. These ships were used to end most pirate activity off the Barbary Coast. In the 20th century American blue-water navy capability was demonstrated by the 1907–1909 world tour of the Great White Fleet.

The 21st century United States Navy maintains a sizable global presence, deploying in such areas as East Asia, the Mediterranean, and the Middle East. It is a blue-water navy with the ability to project force onto the littoral regions of the world, engage in forward areas during peacetime, and rapidly respond to regional crises, making it an active player in U.S. foreign and defense policy.

Relationships with other service branches

The Navy and Marine Corps have a distinct relationship, the USMC depends on the Navy for religious support (i.e. chaplains) and medical support (i.e., dentists, medical doctors, medics known as "Corpsmen" and medical service staff); thus officers and enlisted sailors from the Navy fulfill these roles. When attached to Marine Corps units deployed to an operational environment, they generally wear Marine camouflage uniforms, but otherwise they wear Navy dress uniforms unless they opt to conform to USMC grooming standards (appearance).

In the operational environment, as an expeditionary force specializing in amphibious operations, Marines often embark on Navy ships in order to conduct operations from beyond territorial waters. Marine units deploying as part of a Marine Air-Ground Task Force (MAGTF) operate under the command of the existing Marine chain of command. Although Marine units routinely operate from amphibious assault ships the relationship has evolved over the years much as the "CAG" (Commander of the Carrier Air Group/Wing) does not work for the carrier Commanding Officer (CO), but coordinates with the ship's CO and staff. Some Marine aviation squadrons, usually fixed-wing assigned to Carrier Air Wings (CVW) train and operate alongside Navy squadrons, flying similar missions and often flying sorties together under the cognizance of the "CAG". Aviation is where the Navy and Marine share the most common ground, since aircrews are guided in their use of aircraft by standard procedures outlined in series of publications known as NATOPS manuals.

Although the Posse Comitatus Act, which prevents federal military personnel from acting in a law enforcement capacity, applies only to the Army and Air Force, Department of Defense rules effectively require the Navy and Marine Corps to act as if Posse Comitatus did apply, preventing them from enforcing Federal law. The United States Coast Guard fulfills this law enforcement role in naval operations. It provides Law Enforcement Detachments (LEDETs) to Navy vessels, where they perform arrests and other law enforcement duties during Navy boarding and interdiction missions. In times of war, or when directed by the President, the Coast Guard operates as a service in the Navy and is subject to the orders of the Secretary of the Navy until it is transferred back to the Department of Homeland Security.[32] At other times, Coast Guard Port Security Units are sent overseas to guard the security of ports and other assets. The Coast Guard also jointly staffs the Navy's Naval Coastal Warfare Groups and Squadrons (the latter of which were known as Harbor Defense Commands until late-2004), which oversee defense efforts in foreign littoral combat and inshore areas. Additionally, Coast Guard and Navy vessels sometimes operate together in search and rescue operations.

Retrieved from "https://tfumux.fandom.com/wiki/United_States_Navy?oldid=46088"
Community content is available under CC-BY-SA unless otherwise noted.