This page is about the evil Shattered Glass Autobot. For his heroic main-universe counterpart, see Ultra Magnus. 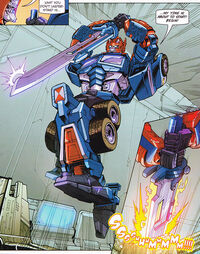 ULTRA MAGNUS long ago grew weary of the tedium of war. He's killed so many and destroyed so much that it's started to all run together in his mind, reducing everything to a fine paste of boredom.

Magnus has tried to make things interesting again, but each bigger and more elaborate coup has only led him to a revolt against his brother, Optimus Prime, and failure. For this he lost his face and his freedom, and he was locked away in the prisons of Paradron.

But soon, Magnus plans to return and pull off the ultimate thrill. He's destroyed lives and property, certainly, but has he ever destroyed a universe? That would be grand, wouldn't it? Maybe it would even make him feel like he did at the start of the war, when everything was fresh and new.

In robot mode, Magnus possesses incredible personal power, as well as a massive two-handed blade with which he is more than capable of rending foes in two. In tractor cab mode his heavy armor makes him a near-unstoppable juggernaut.

Magnus is a confident leader, but sometimes his desire to take ultimate command distracts him from his current situation. Like many others before him, he had plans to take over the Autobots, although Emperor Prime's personal power has made direct attempts difficult. This, however, has not kept him from continuing his quest for domination.

Ultra Magnus led an attempted coup against Optimus Prime, with Hound and Blurr as his only known supporters, though Hound was reportedly a link between Magnus and Alpha Trion. However, during the battle between Optimus and Ultra Magnus, Jetfire intervened, preventing Prime from getting killed. When the coup failed, Prime had Magnus exiled to Paradron as punishment.

When the Ark launched and Emperor Prime left Wheeljack behind, Wheeljack took his own ship, the Star Hammer, and rescued Ultra Magnus from exile on Paradron. Wheeljack and Tracks swore their allegience to Magnus, and with Cybertron now locked away behind the Plait Expanse, travelled to Earth to seek their revenge against Prime.

When a derelict spacecraft was discovered in Earth's orbit, Magnus led a team of confused-at-his-sudden-return Autobots to investigate. There Magnus was reunited with Jetfire, whom he hadn't seen since Jetfire opposed his last coup, leading to his exile. Forming a temporary alliance, the Autobots explored the ship, bringing it to life in the process. Attacked by the ship's inhabitants, Magnus held off the masses while Growler and Jetfire escaped. Magnus was overwhelmed by the attackers and captured.

Trailbreaker was captured by the Junkions with Ultra Magnus, but when Magnus defeated the strongest Junkion aboard Ahr-Vee and revealed his connection to exiled Junkion leader Wreck-Gar, the Junkions accepted Magnus as one of their own, and released Trailbreaker to Magnus's custody. Magnus sent Trailbreaker to Iacon to serve as his optic-band and audio sensors in the Autobot command state.

In April of 2011, while SG-Perceptor was broadcasting the execution of Slugfest on ABN, Temperance staged a daring rescue from orbit. Cosmos gave chase, but Temperance evaded him. Before Cosmos could continue pursuit, the SG-Junkions activated their gravity drive and folded space directly into the Plait Expanse. Practically the entire Junkion fleet passed into the Cybertron system.

Temperance saved Slugfest as the Junkions poured onto the surface of Cybertron, led by Ultra Magnus. While wholesale pandemonium spread across Cybertron, Magnus chased Perceptor and Cuffs back to Iacon. Perceptor went to activate the Stellar Spanner so he could flee to Earth, while Cuffs got stuck outside. Magnus grabbed Cuffs, brought him up to the Spellar Spanner, killed Perceptor and threw Cuffs in instead. Cuffs (along with Perceptor's head) was then sent through to Earth to deliver a message to Emperor Prime: Magnus is coming for him.

Magnus then discovered that the Terminus Blade was being held in the Temple of Knowledge, and hatched a plan to destroy Cybertron. After sending a warning to Jetfire to tell Optimus that Cybertron was about to be destroyed, Magnus teleported into the temple with the use of one of Wheeljack's Stellar spanners. Magnus attempted to use a doomsday device to destroy Cybertron, but before Wheeljack was able to complete the device Dust Devil preemptively activated it with the Terminus Blade. Magnus attempted to escape before the doomsday device detonated, but Trailbreaker tossed it through the Wheeljack's portal before it closed.

Magnus and his troops survived the detonation. In 2022, Magnus led another attack on positive-polarity Earth, but was delayed by Snaptrap until his destructive goal was no longer attainable. At that point, Magnus withdrew to scheme anew.

For the flashback scene of Magnus's failed coup against Prime, Magnus was played by bzero and then Hubcap.