View source
watch 01:25
Jurassic World: Dominion Dominates Fandom Wikis - The Loop
Do you like this video?
Play Sound
The name or term Ultra Magnus refers to more than one character or idea. For a list of other meanings, see Ultra Magnus (disambiguation). 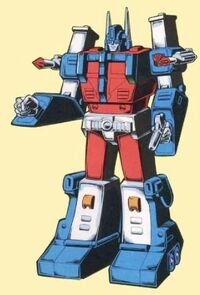 Ultra Magnus is all soldier. He is most comfortable when he is carrying out Optimus Prime's orders - giving it all of his magnificent fighting skills, courage and gift for battlefield improvisation. And he is uncomfortable when the mantle of leadership is placed over his broad shoulders. He sees himself as a follower, not a commander, and is reluctant to assume authority until it is clear that he has no choice but to lead. And when he does finally lead, he is resolute, fair and courageous beyond reproach. He is ever-ready to sacrifice himself for the good of his companions and mission, and unstinting in his preparedness so that his "people" will be as protected as possible.

Ultra Magnus carries missile launchers capable of hitting a target 30 miles away. His Freightliner COE car-carrier mode can transport several Autobots to and from battle. He is an excellent leader, but sometimes his hesitation to take command can cost the Autobots valuable time in an emergency situation.

The Autobots' desperate attempt to launch the Ark ends in failure, and the majority of Iacon's inhabitants are permanently off-lined. Megatron took over Earth, and killed Optimus Prime with his bare hands. Megatron also reigns supreme over Cybertron, as well as many other worlds conquered by the Decepticons, now truly an Empire. The few survivors of the Ark Massacre live beneath the surface of the planet, determined to survive no matter the cost.

Bumblebee leads a ragtag group of survivors, while Ultra Magnus opting to take second-in-command duties (much like his "current universe" counterpart). In 2013, Bumblebee befriended the Decepticon Jetfire . Jetfire agreed to act as a double agent to the Autobots. While speaking with Jetfire and Bumblebee, Ultra Magnus volunteered to give up his own life in a staged fight with Jetfire to ensure Jetfire would rise in the Decepticon ranks. Jetfire reluctantly agreed and told Ultra Magnus to have the Autobots abandoned their current base to make it look like Jetfire "discovered" their last remaining base of operations.

While in battle with Jetfire, Megatron intervened. While confronted with Megatron's arm cannon, Ultra Magnus noticed that the Matrix of Autobot Leadership was encased in Megatron's cannon. Magnus communicated this to Jetfire secretly. Jetfire then fatally shot Magnus straight in his laser core. Megatron, elated with Jetfire's performance, promoted him to Air Commander. Once Megatron departed, a grieving Jetfire carried Ultra Magnus to the Temple of Knowledge and placed Ultra Magnus' body in the same secret room that contains the tombs of Alpha Trion and Optimus Prime.

With the help of Jetfire assuming control of the Decepticon space bridge, Bumblebee and Springer led the Autobots to safety as the bridge beamed the remaining Autobots to planet of Nebulous, one of the few planets capable of supporting Transformer life. Among the 'cargo' for one of the space bridge transports was enough supplies to get the Autobots started, along with the bodies of Alpha Trion, Optimus Prime, and Ultra Magnus. The three storied Autobots now rest peacefully in a memorial pavilion, just outside the newly-built Autobot City.

In 1999, Ultra Magnus was temped by Bzero. Since then, Ultra Magnus was famously played well by Rusty, but is now available for application. In 2008 he was played by Foxfirestorm. Later he was temped by Dean until September of 2010, and then was taken over by Bzero again in April of 2012 and most of 2014. In November of 2014 he was taken over by Darksabrz. For the Spirit of Freedom TP he is temped by horsetuna. For the trial of Jetfire he was played by Bzero. He's still open for application.