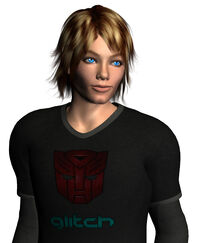 Tyson is the classic curious kid. He's eleven years old, and pretty innocent, despite all the bad things that have happened to him, leaving him an orphan living on the streets. He survives by sneaking around, picking pockets, and committing other acts of small-scale theft. He has a deep fascination for Transformers, Autobots in particular, and will do just about anything to find out more about them. He distrusts Decepticons and outright hates Megatron, but he's still curious about them. He's pretty small, and has never touched a gun before, but he carries a slingshot and knows how to use it!

Tyson Gavitt lived a normal enough life for years. He was born in New York City, the son of Samuel and Judith Gavitt, Samuel a member of the NYPD and Judith an up-and-coming young lawyer. Tyson's childhood happiness was shattered when his father was killed in the line of duty during a Decepticon attack. His obsession with Transformers developed soon after. His mother moved the pair of them from the suburbs to an apartment in the city, where she set up shop as a legal advisor. During a subsequent Decepticon attack, while Tyson was out on his newspaper delivery route, the apartment was destroyed by a flying chunk of debris. His mother was killed in the resulting explosion. When Tyson came home to that, something snapped and his flight response kicked in. He ended up living on the street, learning to survive on his own by acts of petty theft.

An Autobot named Dust Devil was the first one to take Tyson in. First identifying as a Junkion, Tyson was later unofficially adopted by the Autobots. In part, this was allowed because of the presence of Katie Sorensen, who was able to see to Tyson's specifically human needs.

I started my first MUD in mid-1996 and joined TF2k5 in summer of 1997. At the time, I had very little notion of what the heck I was doing. I like to think I've come along a bit since then. I've played scores of characters over the years on dozens of games, staffed all over the place, and served as game director for several of my own MUXes. Here on TFU, I served as the game's first Optimus Prime. I've been away for a long time but hey... it's never too late to make a comeback right?