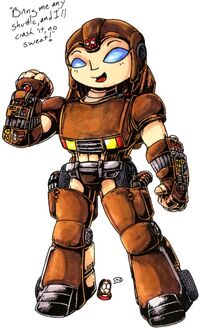 Nowhere is more of a home to TYPHOON than wide open spaces. She's an expert at finding shortcuts and alternate routes to nearly any destination imaginable. She will often drive off alone, testing her shortcuts to see if they work. But most of the time, she doesn't have a chance to test them before a particular one is needed. This causes a lot of problems for the Weatherbots and Autobots following her, when she discovers that her "shortcut" isn't as well planned as she thought. As a Weatherbot, she's equipped with full Doppler and Nexrad weather tracking equipment, along with a roof aerometer in her Land Rover mode. In Land Rover mode, she has a roof rack loaded down with meteorological equipment. She and her 'twin sister' Hurricane are coastal-storm experts, and are built to withstand gale-force winds and crushing waves. She is armed with a whirlwind gun in robot mode, as well as paired Weatherbot laser pistols. She is heavily armored, with a ram plate and towing winch in Land Rover mode. In this mode, she is also equipped with twin top-mounted rocket launchers, and hood-mounted laser batteries. When she can't avoid it, she merges with the other Weatherbots to form F-5, as the right leg. While very smart and good at her job, she is also very stubborn, and her bullheadedness can often get her into more trouble than even she can handle.

Typhoon is a tall brown robot, almost the size of Trailbreaker. She is built solidly and appears heavily armored, yet moves with a carefree agility that belies her bulk. Her face is tan and human-sculpted, appearing almost Asian in its features. Her large optics shine a pale sea blue, and are unusually almond-shaped. The down-facing hood of a 1997 Land Rover forms her chest, and her thick armor is predominantly brown, usually caked with dried mud and sand. Her limbs are long and powerful, with weather-mapping sensors built into her forearms. The built-tough Weatherbot navigator frequently appears brave and overconfident, her stance and bearing belonging to someone unaware of her own limitations.

A custom brown 1997 Land Rover Discovery, complete with self-leveling suspension, front lamp guards, and a touring box filled with high-tech weather-sensing equipment. A Pacific coastal scene is painted across the back windows of the off-road vehicle, and the vanity plate reads, "TAIFENG."

Ty looks... different. Although still brown and tan, she seems much shorter now – just over 10’, practically a Mini-bot. Her chest now resembles the down-facing flat hood of a World War II-era U.S. Army Jeep. Her arms are covered with cloth instead of advanced weather-sensing gear. She still has a custom tornado design on her chest, but it’s now enclosed in a dashed white circle. Overall, she just looks more low-tech, with a 1940s military design aesthetic. She seems a bit out of sorts, missing some of her usual youthful overconfidence.

This small 1944 Willys MB four-wheel-drive utility vehicle is an iconic World War II-era U.S. Army Jeep. It is brown and tan in color, unlike most Army-green Jeeps, and has a custom tornado design in the dashed white circle on its flat hood instead of a star. A cloth cover protects the otherwise-exposed passenger area – the Jeep lacks doors. The front of the vehicle possesses the familiar and Ford-designed distinctive stamped, slotted steel grille identifying this as a true Jeep.

In 2011, Typhoon and the other Weatherbots accompanied Alpha Trion to Cybertron to protect him while he investigated evidence that the Temple of Knowledge had been found and breached. Entering the Temple, the Autobots discovered a hidden portal to the Shattered Glass universe. Passing through the rift, the Autobots encountered Shattered Glass Cyclonus, Professor Razorclaw, and Commander Starscream. The Autobots offered to help the Decepticons against the evil Autobots from that universe, as well as their invasion by mad Junkions led by Ultra Magnus.

The Autobots were attacked by Captain-Mal aboard the pirate ship V'ger, with the help of Razorclaw was able to drive off Mal's crew and capture his ship. Once Chromia had scanned the ship for obvious traps, the V'Ger was boarded by Blizzard, Dust Devil, Firestar, Krunix, Stormwind, and Typhoon. Typhoon moved Longsight to the brig, while Dust Devil took command of the bridge and Stormwind discovered Aria cowering in engineering. After much coaxing by Blizzard and Stormwind, Aria came out of hiding, and eventually agreed to assist the Autobots in maintaining the ship for them. Dust Devil promised Aria the ship would be turned over to her command after the Autobots were through using it. When Blizzard examined one of Aria's little "assistants," she discovered it contained the core of Laserbeak, who begged Blizzard to end its existence. Instead, Blizzard built Laserbeak a new body from parts left around the V'Ger.

When Alpha Trion left in the V'ger to pursue his evil counterpart, Typhoon stayed behind to guard the Temple of Knowledge.

After the Old One critically injured Dust Devil and escaped, Krunix interrogated Dust Devil while Alpha Trion went for help. Returning with Typhoon, Alpha Trion got Dust Devil back to the V'ger and saved his life, repairing him with what parts Blizzard could fashion aboard the Junkion ship. Trion ordered Dust Devil to remain in sickbay until he was fully recovered, which meant of course Dust Devil tried to escape as soon as possible. Longsight, who was in the V'ger's brig when it crashed in Kaon, had escaped into the walls of the ship. Longsight lay low until Dust Devil also tried to escape into the ship's infrastructure, at which time Longsight pounced, attempting to capture and eat Dust Devil. It took the combined efforts of Alpha Trion, Dust Devil, and Typhoon to drive Longsight from the ship; Longsight and Typhoon both had half their faces melted off in the process.

Alpha Trion repaired Dust Devil AGAIN and resumed plans to capture the Old One. Typhoon remained in the V'ger with Dust Devil, keeping him company until it was time to move against the Old One. Alpha Trion, however, sent the Weatherbots on a secret mission with the Technobots, to bring a secret message to Salvation. While en route, Typhoon witnessed the rise of the Dweller, and then returned to Earth to assist with natural disasters across the planet.

On Friday, May 24th, 2013, Typhoon, along with several other Cobra, G.I. Joe, and Transformer individuals disappeared from all over the world, awaking in the past. Typhoon found herself in the body of a WWII-era Jeep, and hid out with other time-displaced refugees as soon as she located the others. After helping to fix a problem threatening to alter the timeline, she was returned to the present, where she was left slightly disoriented. She witnessed the 2013 re-awakening of Blitzkrieg, and then returned to the US during the Quintesson invasion, where Grimlock put her in charge of helping human refugees from LA.

During the final battle with the Quintessons, the Weatherbots formed F-5, and Typhoon was infected by the Dweller virus. When the Quintesson invasion was over, Typhoon helped repel an invasion of Autobot City by Shattered Glass Autobots, and then travelled to Shanghai to help with post-invasion recovery efforts there.

In 2014, First Aid was able to reverse the effects of the Dweller virus on the Weatherbots, using a modified version of the cure developed by Jetfire and Starscream. However, later that year Typhoon was infected by a new nanovirus invented by Dr. Arkeville. Typhoon was brought back to Decepticon City for study. In October of 2014, a small team of Autobots and G.I. Joes infiltrated Decepticon City to capture Dr. Arkeville and rescue Typhoon.

In 2017 she helped defend Metroplex during an Attack on Autobot City.

In 2018 she took part in the defence of Valvolux, descending beneath the city in the search of aid.

In 2020, Typhoon was possessed by the Dweller again, but she was eventually rescued and cured.

During the Timewarp TP, Typhoon was replaced by a future version of herself, and seemed to have some sort of relationship with Future Mort. When she was first built she had a long trailer, but she was later rebuilt without the trailer, sacrificing some mass in exchange for greater maneuverability

In Cobra World, Typhoon has been rebuilt into a Cobra Stinger, and is piloted by a Stinger Driver.

Typhoon of Con World is a nervous, twitchy Weatherbot. Built to combat the vicious Rainmakers of Vos, vorns hiding underground from the Decepticons have made her paranoid and scared of the slightest noise or shadow. While she longed to strike back at Megatron and the Decepticons, or at least just escape Cybertron, she not-so-secretly believed that the remaining Autobots were going to be slaughtered, and that Bumblebee was leading them to their doom.

Bumblebee, with the help of Sky Lynx, Grimlock, Jetfire, and Springer, rallied the Autobots for a daring raid on the Decepticon Space Bridge. On the third and final transport of Autobots to their new home of Nebulos, Shockwave blasted the Space Bridge, almost destroying it, and instantly killing almost 40 elite Autobot warriors, leaders, and scientists. However, the Space Bridge remained intact and Bumblebee and the rest of the Autobots were able to escape to Nebulos. While on Nebulos, Typhoon presented Bumblebee the Autobot Matrix of Leadership, which was recovered from Megatron. Typhoon and Perceptor presented the Matrix of Leadership to Bumblebee. He accepted and was awarded the title of Prime.

In the Joeverse, Hurricane and Typhoon were built by G.I. Joe as VAMP IIs. Although they were the latest in human AI technology, they were still little more than glorified androids. By 2016 the Weatherbots had been modified and upgraded enough by Ratchet and Wheeljack to approach true sentience.

bzero has played Typhoon since shortly after the MUX opened in 1997.

Typhoon was played by Double0Snake for the end of the Decepticon World TP.