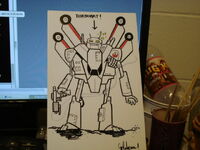 TURBORAT is one of the few remaining neutrals on Cybertron. One of the homeless of the Transformers’ home world, he is flighty and distrustful of everyone. Wary and suspicious of both sides, Turborat seems to know how to find a lot of things, if one can figure out how to get him to show you. His rarely used alternate mode is a UUV - Underground Utility Vehicle; a curious vehicle with eight wheels: four on top, four on bottom, and angled for round tunnels. He is normally seen carrying a staff of sorts with a vicious hook on one end and when cornered, he will attempt to defend himself if fleeing is impossible. He is insanely curious about the past; he has several hidden hoards of long-lost relics from the Golden Age of Cybertron. He knows his way around underground Cybertron better than any almost any other Transformer and has incredible climbing and agility.

Most of him was rust colored. The rest was a patchwork of different paints from the countless armors he's welded on to keep alive. His wheels are surprisingly in good shape though - duct taped here and there to hold them together. His optics used to be red, but now are a washed out pink.

In September of 2009, Turborat witnessed the arrival of the Old One to Cybertron.

A UFO was sighted over Antarctica late last night/early morning. No satellites or other defense systems were triggered by it so somehow it slipped in past them. The Scientists at the South Pole observed its' pinpoint streaking across the sky and rough shape but could not ascertain where exactly it landed and it has not been seen since.

The following morning several went out on snowmobiles to investigate, but found only very large footprints and strange tire tracks.

Authorities suspect it was probably just some more Transformers having some fun.

Back to you, Jane.

Rumors of a battered up transformer have been coming out of Brazil. One Farmer says the robot bashed through his barn and planted explosives in the back of it, though nobody has really wanted to go and find out. He described it as having eight very large wheels, and that at one point a ship of them had arrived, spoken to him and then departed. Thus far, any further details are confusing and contradictory.

Turborat runs into Barbecue and Mara in Florida, and then is surprised by a Decepticon...

Blaster has another run-in with Turborat, this time on Earth.

Turborat is found by Buzzsaw.

December 27: Be Our Guest

Major Bludd makes Turborat an offer he can't refuse, but when the mech arrives on Cobra Island, he begins to have second thoughts.

Interrogator meets with Turborat to make an exchange. Unfortunately, it's anything but a private party.

Turborat is played by his OOC creator.