This page is for the evil Shattered Glass G.I. Joe explosives expert. For his heroic main-universe counterpart, see Tunnel Rat. 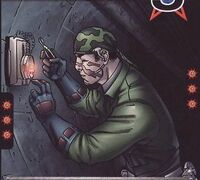 "Sometimes, you have to go down and through before you can go up and over."

TUNNEL RAT believes that anything that doesn't kill you makes you stronger. His feeling about crawling into an enemy tunnel with a knife in one hand, a pistol in the other and a flashlight in his mouth is simple -- he can shoot straighter, bite harder and run faster than anything he's ever encountered in a tunnel, so why worry? Tunnel Rat's family tree is Tridadian Chinese with branches of Irish, Spanish and Indian thrown in. He grew up on the streets of Brooklyn, got tough on the Ranger Course at Fort Benning and honed his skills in Grenada. He is a qualified expert with all NATO small arms and is familiar with most Warsaw Pact explosive devices.

Tunnel Rat's diverse family tree is Trinidadian Chinese with Irish, Spanish and Indian. He grew up on the mean streets of Brooklyn, toughened up on Fort Benning's Ranger Course, and even more in action in Grenada. Tunnel Rat is also a trained explosive ordnance disposal (EOD) expert and combat engineer. His fearless attitude keeps him ready to crawl through an enemy tunnel ready for a fight. In addition to all this meanness, Tunnel Rat has no sense of humor and is hard to get along with off duty.

On his first mission for G.I. Joe, Tunnel Rat worked with a weapons research and testing team in the Utah desert. When the group packed up and headed out on the road, their convoy encountered Father Cobra himself, and they nearly killed him before he got away..

In his other missions, Tunnel Rat later helped knock out power to Cobra's hideout in New York from the sewers below, and went on a near disastrous mission to find a traitor and spy in Southeast Asia.

Months later, Tunnel Rat joined a team of Joes onto Cobra Island on a reconnaissance mission. They stumbled upon peaceful hippies and when the Joes attacked, Falcon's team became advance scouts for the Joes' invasion and had to forcibly take control of Cobra Island's airfield control tower to allow their teammates access to the airfield.

When Destro's defending army forced the team into the sewers, Tunnel Rat took the point through the island's sluice tunnels during a rainstorm as the water rose dangerously higher. By the time Tunnel Rat and the others joined up with the rest of the Joe team, the battle was over and most of the hippies were dead.

Over the years, Tunnel Rat continued on many missions for the team, including the Battle of Benzheen, defending the Pit from Cobra attack and slaughtering the Cobra-controlled town of Millville.

When Tunnel Rat isn't killing people for Uncle Colton, he spends his time in Brooklyn preying on underpriviledged kids in his old neighborhood.

In 2010, Tunnel Rat was called in by G.I. Joe to examine a strange object found in the cell of an alien robot they had captured but who had somehow escaped.

temped by Bzero in 2010. Available if someone wants to take him over.

Retrieved from "https://tfumux.fandom.com/wiki/Tunnel_Rat_(SG)?oldid=35991"
Community content is available under CC-BY-SA unless otherwise noted.