The Transformers Universe MUX is a multiplayer online text-based role-playing game with an 80s comics and cartoon theme. This wiki is for players new and old alike, and for people just interested in the world we created for our MUX.

To connect to the MUX, simply point your MUSHclient or SimpleMU* client to tfuniverse.mudhosting.net port 1976. You may also go to this web-based client, or the flash client @ mudconnect.com and enter the connection info there. If you're on Android, try Blowtorch! Then just enter connect guest and talk on the Guests channel by entering g Hi!

For players new to the world of MU*ing, the following are guides to help people get started and connect.

Please welcome our new Goth and Starlock to the MUX!

Kodiak is back on his feet but still needs to get used to his new alt form. It's running a bit rough.

Cookie and Kamakura meet an unusual Autobot in the desert.

Deathsaurus visits Valvolux's market, where Delusion is working on a project.

Iacon sees some new faces and some old ones that haven't been back in a while.

Some of the younger Cybertronians work on finding their way.

Delusion checks in on Harmonex. Soundwave is there with his whole menagerie.

Dust Devil continues to work with Jetfire in the aerospace division. Scales comes by with a medical and ethical problem.

Not sure where to start?

This wiki is open for anyone to edit! Want to help add things? Below you can find out ways to start adding things!

However, none of that formatting is needed if you don't feel like fiddling with wiki code. Feel free to just post a character background, log, or page, and let us do the rest!

To write a new article, just enter the title in the box below. Don't be shy! 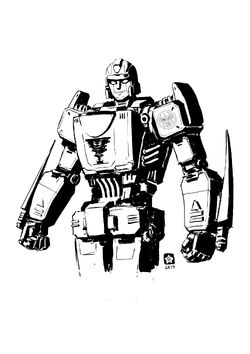 Dust Devil has probably caused more Autobots to go get showers than he would care to admit. Kicking up dust has been a blast for him since he reached Earth. His usefulness was discovered when one of his accidental dust storms saved some of his teammates. Before this incident Tracks and Sunstreaker were all for reprogramming him. Dust Devil's hover car mode is jet propelled with small rockets allowing for high-speed bursts to get him out of danger. His twin side guns, available in both forms, allow him to fire while his fans kick up cover for his teammates. In his role of creating diversions, he has a force field that allows him some protection from both the debris that he kicks up and any crossfire in which he gets caught. If the crossfire is too heavy or he is somehow wounded before he can escape, his ability to hide lets him lie low until help arrives. Dust Devil's rotors are what keep him aloft with two main fans for lift, a set of smaller fans in the front and back for propulsion, and side fans for stability. Maneuverability is not a problem for this Autobot. Between the rockets and all the dust, it can be a challenge for some of the best sharpshooters to hit him. In robot mode he is able to exchange his hands for fans to allow him to create cover in other situations.

Keep up with news and connect with players on these sites!

With 6,269 images on the TFUMUX Wiki, there is no shortage of pictures.

This image has been randomly selected. For more information, click directly on the image. The resulting page has a link to detail when it was uploaded, by whom, and which articles use it.

Retrieved from "https://tfumux.fandom.com/wiki/Transformers_Universe_MUX_Wiki?oldid=77804"
Community content is available under CC-BY-SA unless otherwise noted.