View source
watch 01:25
Jurassic World: Dominion Dominates Fandom Wikis - The Loop
Do you like this video?
Play Sound
The name or term Trailbreaker refers to more than one character or idea. For a list of other meanings, see Trailbreaker (disambiguation). 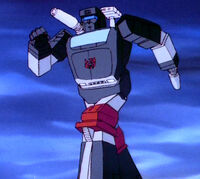 "Looks like some pigeonoids can't find their nest." That's how Trailbreaker describes a full-scale attack by a battalion of flying Decepticons. He'll make light of anything, no matter how dire the situation, and has been known to cross the optic circuits of Huffer while he's in his rest mode. Even Huffer laughed at that one. He's the Autobot cheerleader. But there's a darker side to Trailbreaker. He is the most fuel-consuming Autobot and thus believes he is a liability to the group. He often has volunteered to be left behind in battle situations rather than use up precious resources. His lack of self-esteem is apparent to Autobot Leader Optimus Prime, who continually reassures him of his value.

Trailbreaker's force-field projector can create an invisible barrier with up to a 30-foot radius that withstands penetration by all forms of projectiles, all wavelengths of electromagnetic radiation except those of extremely high intensity, and temperatures as high as 800,000 degrees Centigrade. However, a sustained assault on the force-field, if strong enough, can eventually weaken and destroy it. Trailbreaker also wears a radio-jamming broadcaster. He can transmit signals on 64 frequencies simultaneously and often uses it to jam enemy attempts at stopping Autobot communications.

His high fuel consumption and slowness of movement make Trailbreaker particularly vulnerable in certain situations. He'll often mope about his handicaps and forget about his responsibilities as a consequence. But his bravery and defensive prowess are unquestioned, and he can usually recover his wits in time to save himself and his comrades.

Trailbreaker was part of the bridge crew of the Ark spaceship when it blasted off from Cybertron to search for new sources of energy four million years in the past. When he was awakened in 1984, Teletraan I reformatted him so that his alt-mode was a terrestrial Toyota 4WD Hi-Lux camper truck. Trailbreaker accompanied his fellow Autobots on their first mission to stop the Decepticons on Earth, a mission that took him to an off-shore oil rig. The Decepticons plundered the rig for energon and destroyed it, leaving it a flaming wreck that endangered its human crew. Trailbreaker used his force field to contain the fire, while Wheeljack used his built-in fire-suppression systems to douse the flames.

Later, Trailbreaker served as a spy despite his stated function as defensive strategist. (Mirage was apparently busy that day.) He, along with the humans Sparkplug Witwicky and Spike, camped out near the Decepticons' headquarters and eavesdropped on their plans to raid the ruby mines of Burma. Their surveillance did not go totally unnoticed, however, as a set of Seekers spotted the Autobot making his getaway. Trailbreaker summoned the brothers Sunstreaker and Sideswipe to fend off his pursuer and got the information safely back to Prime.

When the Autobots began studying a meteorite that had fallen to Earth, Wheeljack discovered the sample fragment was highly unstable and summoned Optimus and Trailbreaker to his laboratory. On command, Trailbreaker unleashed his force field around the meteorite to contain the explosive blast.

One time, when Megatron temporarily reprogrammed Gears to be a happy-go-lucky kind of Autobot, Trailbreaker was the one who voiced what everyone was thinking and said maybe they should just leave him that way.

When the Dinobots attempted to demonstrate their newfound "finesse" to the other Autobots, Slag accidentally set fire to the Ark, threatening Teletraan I. Thinking quickly, Trailbreaker projected his force field over the Autobot supercomputer, allowing Inferno time to extinguish the blaze.

On another occasion, the Autobots were forced to abandon Earth by Megatron aboard a spacecraft set on a course into the sun. After the Autobots discovered they couldn't alter their course, their ship exploded. Trailbreaker cast a massive force field large enough to contain the entire Autobot force safely; from within the field, Cosmos towed the group back to Earth.

After that, a Decepticon coup by Starscream, Astrotrain and Blitzwing resulted in a city being flooded. Trailbreaker used his force field to protect himself and a small group of Autobots from a large tidal wave.

In 2012, Trailbreaker travelled to the Shattered Glass universe to help Dust Devil set up defenses to protect the Temple of Knowledge.

Magnus discovered that the Terminus Blade was being held in the Temple of Knowledge, and hatched a plan to destroy Cybertron. After sending a warning to Jetfire to tell Optimus that Cybertron was about to be destroyed, Magnus teleported into the temple with the use of one of Wheeljack's Stellar spanners. Magnus attempted to kill Alpha Trion, but Trailbreaker defended Trion from the attack with one of his forcefields. Tracks was dispatched to stop Blaster, and was able to drive Blaster back and burn out one of his optics. Wreck-Gar focused on acquiring the Terminus Blade from Dust Devil, and brought back several Autobots from the dead to use as his minions. Wreck-Gar and his Junkions, however, were kept at bay by Firestar's fire. Magnus attempted to use a doomsday device to destroy Cybertron, but before Wheeljack was able to complete the device Dust Devil preemptively activated it with the Terminus Blade. Magnus attempted to escape with the Terminus Blade before the doomsday device detonated, but Trailbreaker tossed it through the Wheeljack's portal before it closed. It is unknown if Magnus and his troops survived the detonation.

Soon after, Throttle was assigned by Sir Soundwave to assist Alpha Trion in the Temple of Knowledge. Although initially distrusted by Red Alert (surprise!), she was welcomed by Blaster and Trailbreaker and asked to patrol the Manganese Mountains until needed for infiltration and sabotage missions.

In 2017, when Overbite led his clones on an attack on Autobot City, Trailbreaker led the defense. He held Overbite back at first, but soon the Seacon was able to overwhelm Trailbreaker's forcefield and hit him with Overbite's Jawbreaker cannon, badly burning Trailbreaker's armor.

In the Witwicky World universe, Trailbreaker is killed by Insecticons.

Trailbreaker has been temped by bzero, but is available for application.