This page is for the evil Shattered Glass Autobot Tracks. For his heroic main-universe counterpart, see Tracks. 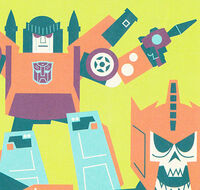 Sure, other Autobots may scoff at his decision to go with an Earth-based alternate mode, but TRACKS couldn't care less. He knows the value of looking good and isn't afraid to let others know it. It's not simply his own lines he's interested in; he has an appreciation for well-built mechanical bodyforms of all sizes and functions... and a nasty penchant for tearing them apart after he's done admiring them. His combat abilities are impaired by his concern over marring his appearance, and he often remains in his more vulnerable car mode in combat when it would be wiser to revert to his robot mode. Vanity can blind anybody to the truth, even a robot. In Corvette mode, Tracks can reach speeds of 280 mph on the ground, and can also sprout wings from under his rear fenders, allowing him to fly at sub-sonic speeds. He can also fire two heat-seeking incendiary missiles from a launcher on his hood up to 60 miles. The missiles can be used in robot mode also, along with his black beam gun, which shoots a beam that adheres for several minutes, effectively blinding anyone hit by it.

Tracks helped Wheeljack break Ultra Magnus and the Junkions out of the prisons on Paradron.

Tracks is part of Ultra Magnus's forces on the Star Hammer.

Magnus discovered that the Terminus Blade was being held in the Temple of Knowledge, and hatched a plan to destroy Cybertron. After sending a warning to Jetfire to tell Optimus that Cybertron was about to be destroyed, Magnus teleported into the temple with the use of one of Wheeljack's Stellar spanners.

Tracks was dispatched to stop Blaster, and was able to drive Blaster back and burn out one of his optics. Magnus attempted to use a doomsday device to destroy Cybertron, but before Wheeljack was able to complete the device Dust Devil preemptively activated it with the Terminus Blade. Magnus attempted to escape before the doomsday device detonated, but Trailbreaker tossed it through the Wheeljack's portal before it closed. It is unknown if Magnus and his troops survived the detonation.

Tracks is available for temping. Nagi-Oki has dibs.