This page is for the heroic Autobot Tracks. For his evil Shattered Glass counterpart, see Tracks (SG). 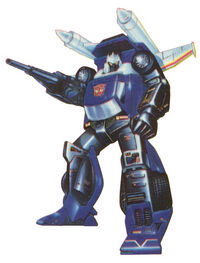 "Lousy Earth-lover," is one of the nicer epithets used by some of Tracks' comrades to describe his behavior. After all, he makes no secret of the fact that he prefers the sleek and classy Earth form given to him by the Ark over his original robot form. If the war didn't require him to sometimes revert to his Autobot form, he might stay a car all the time. He attributes his fellow Autobots' criticism to jealousy on their part - they don't look as good as he does in vehicular form, he reasons. But their displeasure stems from a more serious consideration. They feel the struggle against the Decepticons should be Tracks' prime concern, not his own looks. Vanity can blind anybody to the truth, even a robot.

In vehicular mode, Tracks can reach speeds of 280 mph on the ground. He can also sprout wings from under his rear fenders, which allow him to fly at sub-sonic speeds, and he can adapt a launcher to his hood that fires two heat-seeking incendiary missiles up to 60 miles. The missiles can be used in robot mode also, along with his black beam gun, which shoots a beam of black light that adheres for several minutes, effectively blinding anyone hit by it.

Tracks' vanity is his greatest foe. His combat abilities are impaired by his concern over marring his appearance. He often remains in his more vulnerable vehicular mode in conflict situations when wisdom dictates he revert to his robot mode.

Tracks arrived on Earth during the initial impact of the Ark into the planet. He had been present when the Ark crashed onto prehistoric Earth during the encounter wih the Nemesis, but due to being in the more heavily-damaged Ark belowdecks, he was not recovered and repaired for almost a year.

Track's life on Cybertron must not have been too good if he prefers Earth enough to stay there (as he proclaims in "Making Tracks"). He speaks with a cultured tone and a rare upgrade befitting a high society mech, not nobility like Mirage but someone of wealth and upbringing. However, he spent a portion of his life under the control of others, which he seldom talks about but comes out at times, like when he yelled at Raoul for saying he owned him.

Tracks is more willing than most Autobots to help humans. He was a crucial player in New York's Crime Buster program to break up a rash of car thefts. When the others teased him about his affinity for Earth he got defensive and left in a huff. He was nearly carjacked and ended up smashed up to the point he couldn't transform. A street punk named Raoul came along, befriended and fixed up Tracks. Together they uncovered a Decepticon plot involving stolen cars.

Another instance, Tracks and Blaster return to New York to investigate some Decepticon activity. They meet up again with Raoul who tells them about this popular new club called the Dancitron. When they go to investigate it, Tracks notices a lot of people who just don't fit in with the club he's seeing. His hunch turns out to be correct when he finds out Starscream and Soundwave are behind a Decepticon plot to use music to hypnotize humans into slave. He attempts to confront the Decepticons only to get captured and taken prisoner.

Luckily for him, Raoul and Blaster show up. Blaster defeats Soundwave and destroys the equipment, Raoul frees him, and Tracks then manages to defeat Starscream with his aerial acrobatics. He was grateful for Raoul saving his life and with Blaster's unwilling assistance helped his friend earn enough for a new boom box.

Later, Tracks became involved in the Europa 2000 cross country car race. Along with some other fellow Autobots, they were charged with keeping an eye on the arrogant and abrassive racer, Auggie Canhay, whose racing car was specially designed by Symultech Industries. The Stunticons systematically attacked and disabled all the Autobots except for Tracks, Bluestreak, and Bumblebee. Then they stole Auggie's car. The remaining Autobots teamed up with the racer against Megatron and Menasor to stop them from using the Pearl of Bahoudin to create global weather catastrophe. They successfully stopped Megatron and recovered the pearl casing which they gave to charity.

Tracks has been a part of many missions for the Autobots, especially those where interactions with humans are critical.

Tracks was killed by the Fallen in 2019. Later that year he was resurrected by Bad Mort and had to be killed again.

Tracks was played by Nagi-Oki from July 2008 to Novemeber of 2009. He was temped by Bzero in 2012. Tracks was killed i 2019 and is no longer available for application.