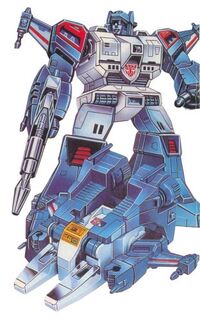 Facing off against Decepticons isn't nearly enough of a challenge for Topspin. He'd rather pit himself against Nature itself. No mountain is tall enough, no river treacherous enough to give him pause. Alone against rough terrain, be it on land or in the sea, is where this Wrecker's fuel pump really gets going. Though he loves the challenge he's not fixated on conquering new terrain, he simply enjoys pitting himself against it.

As a Jumpstarter, Topspin can transform between modes in a fraction of an instant, significantly faster than most Transformers. In air-skiff mode, Topspin is propelled by two rear-mounted jet engines, which can accelerate him to speeds of 300 mph on a flat surface. He also is equipped with two pontoons projecting from his front, which allow him to travel up to 80 mph on water, like a hydrofoil. Using two side-mounted high-voltage electric blasters, two small hand-mounted lasers, and a powerful particle beam rifle, Topspin can release a near-unrelenting barrage of devastating force. Like his brother, Twin Twist, he can spring from his vehicle mode into his robot mode in less than half a second. His weaponry is available to him in either mode.

His preoccupation with personal glory often distracts Topspin from more threatening situations, such as a Decepticon attack. The high fuel demands of his jet engines and weaponry leave him more vulnerable to exhausting his energy supplies than most other Autobots.

On the MUX, Topspin is from Nova Cronum.

During the Ark crew's four-million-year sleep, Topspin was active on Cybertron as one of the Wreckers.

Topspin is usually based on Cybertron as one of the Wreckers.

In 2013 he was active in protecting coastal areas from Seacon attack, along with two new recruit hangers-on.

Topspin is available for application. In the meantime he is played by Bzero.

In the Shattered Glass universe, Topspin is believed dead. He was a member of Rodimus's Wreckers until reported killed in Praxus-Delta.