This page is an Autobot DC tape-bot. 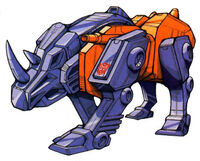 Top-Heavy is a realist, though others would call him a "nag". Daydreamy behavior like Skids's annoys the "down-to-earth" Top-Heavy greatly. Top-Heavy can change from rhinoceros to a radar-guided, triple-barreled, electro-pulse machine gun in less than an instant.

When Top-Heavy joined the Autobots on Earth in 1990, he was rebuilt into a robotic rhinoceros. His altmode remains a Cybertronian machine gun.

When the Decepticons took over Autobot City in 2014, Top-Heavy was one of the Autobots that guarded the trenches where the Autobots camped outside.

Retrieved from "https://tfumux.fandom.com/wiki/Top-Heavy?oldid=53735"
Community content is available under CC-BY-SA unless otherwise noted.