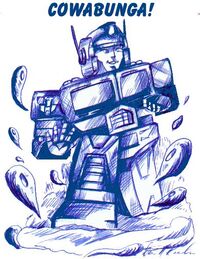 "Ultimate power comes in all sizes."

TONKA is a creation of the Autobot mad scientist Alpha Trion as the ultimate weapon against the Decepticons. His tiny size and wide array of sabotage capability gave him the ability to sneak into Decepticon soldiers, plant explosives on their laser cores, and escape before they were blown to oblivion. His perfect record to date is a testimony to his skill, his lethality, and overall his brutality as he sets the explosives to detonate in stages, destroying the target's mind one bit at a time. When he's not reducing the Decepticon's numbers, he's scouting their positions and sabotaging their equipment to keep them from gaining the advantage in the battle for Cybertron.

Tonka is the brain child of the Autobot mad scientist, Alpha Trion. When the Decepticons discovered the means to transform, they needed a means to infiltrate their ranks and discover their operations since they were now difficult to find and defeat. Through many missions into enemy territory, Tonka succeeded in gathering data on the Decepticon's new transformation process and provided it to Optimus Prime, who was able to use it to give that ability to all of his followers and regain the advantage in his quest to conquer Cybertron. It is for this reason that among the Decepticons, Tonka is Public Enemy #1, and he has a Terminate with Extreme Prejudice flag in the Decepticon's files on Autobot operatives. For his tiny, evil, twisted mind, it is the ultimate achievement, and he takes great pleasure in thwarting their attempts to stop his rampages time after time.

It is unknown if Tonka was aboard the Ark when it launched for Earth.

Tonka is played by Colchek

Retrieved from "https://tfumux.fandom.com/wiki/Tonka_(SG)?oldid=34347"
Community content is available under CC-BY-SA unless otherwise noted.