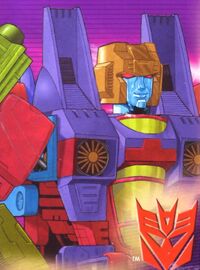 THUNDERCRACKER is a founding member of Deathsaurus' Mayhem Suppression Squad and is its friendly moral center. If his paint job doesn't blind his enemies into submission, he's got a 50-meter sonic-dampening effect to shut them up. He feels so sorry for beings that, unlike himself, are incapable of flight, that he sometimes drags them through the sky unsolicited using his "mango-clamps."

Nonetheless, Thundercracker is utterly admiring of the ordinary citizens and land-based ground-pounders of Cybertron and the Decepticon army. He lives to defend the innocent and provide support for the troops. A drifter before the war, Thundercracker has found his cause, and is utterly devoted to it. The rightness of his cause, and the destiny of victory of all that is good and pure, inspires him to greatness. With this sense of purpose, Thundercracker finds his life exciting and worthy of his efforts. Like his fellow Decepticon jet fighters, Thundercracker can attain speeds over Mach 2.5. He has the additional ability to project a bubble of silence around his enemies, in either robot mode or F-15E Strike Eagle mode. He can launch a drone rocket with a range of 500 miles that behaves similarly to a cruise missile and has the concussive force of 3000 lbs. of TNT. His jet mode is equipped with a special, duraflex metal construction that bends to accommodate excessive G-forces. He is therefore able to fly very fast at low altitudes, skimming across treetops and dodging obstacles with death-defying accuracy. In robot mode, he has a shoulder-mounted automatic cryonic blaster that shoots at 100 rounds per minute cold-resistant ceramic bullets containing a highly endothermic material that freezes targets on impact.

Thundercracker is a nice guy, whose utter devotion to his cause gives him strength to carry on no matter the circumstances. He’s a little unnerved by reports of small, organic creatures on planet Earth, but has pledged to defend them just the same.

While defending innocents during a surprise raid by the Autobots, Thundercracker was defeated by Jetfire's mechs. Thundercracker was held in the POW pens until his sentence of public execution in the Smelting Pool could be carried out. However, he was rescued by Scourge and now assists Starscream in defending Cybertron from the Evil Autobots.

Recently, during a routine surveillance mission, Thundercracker picked up a signal coming from the prison at Paradron. He couldn't be sure, but could it be that some type of jailbreak was in progress?

Windshear temped SG-TC for the flashback fight between Magnus and Prime.

Greengoblinsrk will resume playing Thundercracker in 2016.