This page is for the heroic Shattered Glass Thrust. For his evil Decepticon counterpart, see Thrust. 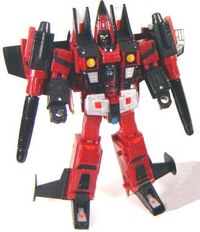 THRUST is a quiet, self-effacing guy. He’d rather his actions speak for him, and he firmly believes in a policy of optics on, mouth shut. Although a generally pleasant fellow, he prefers to remain in the background, and oftentimes his friends don’t even realize he’s there. Only in battle does Thrust stand out. His courage is legendary, and he’d gladly lay down his life to save a comrade or innocent if necessary. After missions he prefers not to make a big deal about it, and gets embarrassed if given too much praise.

In jet mode, THRUST is a multi-role fighter, capable of ground attack, reconnaissance, and air defense missions with stealth capability. A lift fan near the front of his aircraft mode provides him short take off and vertical-landing (STOVL) capabilities. His engine delivers over 60 percent more thrust than most Decepticon fighters, allowing him to reach his maximum speed of over Mach 1.6 in less than half the time it takes other fighters. Thrust uses this ability to take point in most attack raids, drawing fire away from other Decepticons. In both modes Thrust can use a silent four-barrel 25 mm cannon; in jet mode he additionally carries an array of air-to-air missiles (AAM), cruise missiles and guided bombs.

Although his courage is inspiring, Thrust is naturally shy in social situations, and his relatively low self-esteem limits his effectiveness as a leader. Also, in jet mode Thrust has multiple thermal management problems, and overusing his afterburner can damage him severely.

Thrust served Deathsaurus on Cybertron since the beginning of the war as a member of the Colonel's Mayhem Suppression Squad. Tricked into believing that Alpha Trion truly wanted to bring peace between the Autobots and Decepticons, Thrust and his brothers received secret upgrades from the Old One, and pledged their loyalty to him and his goals.

Thrust served Deathsaurus on Cybertron until Jetfire defeated the Colonel and captured Dirge, Thrust, and Thundercracker. He was later rescued by Scourge and continues to serve with the Mayhem Suppression Squad on Cybertron under their new commander, Venom.

In 2018, Thrust was on hand at the Battle of Decepticon City, where he was nearly killed by Emperor Prime.

Thrust remains one of Bug Bite's Mayhem Suppression Squad. Although currently assigned to Cybertron, he is anxious to find a way to escape Cybertron and travel to Earth to help the Decepticon resistance there.

SG-Thrust is currently available for temping.