This page is for the evil Decepticon Thrust. For his heroic Shattered Glass counterpart, see Thrust (SG). 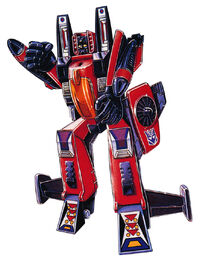 Rattling the very air with the roar of his jet engines, Thrust is one Decepticon who cares little for stealth. He believes that half the battle is won if he can "psych out" his enemy by his mere arrival, and so he makes no attempt to be sneaky. His ability to suddenly and powerfully accelerate can literally shake apart a nearby building, and he delights in the havoc that ensues. He is a loud-mouthed braggart who is prone to pompously claim certain victory before a fight has barely begun. But in truth, his courage is as much bluster and noise as his actions and words: a strong counterattack by an opponent usually results in a view of Thrust's tailwings as he recedes into the distance.

In jet mode, Thrust can fly at speeds of Mach 2.5, but can accelerate in 20 seconds to twice that speed, which he can maintain for up to two minutes. He carries two concussion bomb missile launchers and two compressed air rifles, each of which can shoot a hole in ¼ inch-thick steel plate from a distance of 1200 yards.

As mentioned earlier, Thrust isn't very brave. Also, if he's not careful when rapidly accelerating, his engines can stall, causing him to fall.

When the mighty Autobot Dinobots relocated to the time-displaced prehistoric Dinobot Island, Thrust was one of several Decepticon warriors who accompanied Megatron to the island in the hopes of exploiting the island's vast energy resources. After the Dinobots made their presence known, Thrust stood by to guard the energon cubes while Megatron conspired to eliminate their adversaries. When the Dinobots later convinced the native Dinosaurs to attack the Decepticons, Thrust and Ramjet were trampled in a stampede. Ouchies.

After Megatron sucessfully took control of Central City by manipulating his ally Shawn Berger and the other humans, Thrust was tasked with capturing the escaped human slave Chip Chase. He chased the human into the Autobot base and seemingly prevented Chip from saving the Autobots from a collision course into the sun by destroying Teletraan I, but actually unwittingly saved his enemies by shutting off the autopilot that was navigating their doomed ship. Thrust attempted to crush Chip before securing him in his jet cockpit and returning the human to the power plant, where he had his afterburner handed to him by the Autobots.

Unlike virtually every other Decepticon in existence, Thrust seemed to possess no dreams of personal power. After uncovering a secret supply of the element electrum, which made him invincible, Thrust ran right to Megatron and informed him of the pool instead of using it for his own gain. Maybe he's just too stupid to dream of greater glory. It has happened before.

Thrust's cowardice was legendary among the Decepticons, and they frequently had to put him in his place whenever his bluster became too unbearable. He was particularly insipid on one occasion when he, Starscream and Astrotrain came to Saturn's moon of Titan hunting the Autobot Cosmos. When Astrotrain took advantage of the superstitious locals to force them into serving him as "greatest of the Sky Gods", Thrust quickly fell into the role of lackey instead of challenging Astrotrain like Starscream did. Later, when the Autobots Jazz and Perceptor arrived and engaged the two Seekers, Thrust was quick to flee rather than face even odds in battle. Finally, when the Autobots' transport Omega Supreme was repaired, Thrust voiced the Decepticons' slim chances at survival and they beat a hasty retreat. Not an unreasonable course of action, really -- it seems a coward is a useful point of view to consult during warfare.

Of course, Thrust also isn't much of a people person either. Megatron once gave him the simple task of explaining to the Insecticons that the Autobots had acquired some robotic insecticide to use against them, and that they were to stay clear of the battle until Megatron and his Decepticons could destroy the weapon. Megatron actually planned to horde the insecticide as a failsafe for himself, naturally, but he didn't tell Thrust that. The Conehead's delivery of the message lacked the slightest trace of sincerity, and the Insecticons flew off that very instant to intercept the Decepticons. A future in politics, Thrust does not have.

In 2007 he was assigned to Cybertron Security.

According to MUX continuity he serves Shockwave on Cybertron until Megatron calls him to Earth for reinforcements.

Thrust remains one of Starscream's Seekers. Although currently assigned to Cybertron, he can be called back to Earth whenever needed.

The liftfans in his wings make aerospace engineer IceSpark cry.

>*Audio Report*< "Thrust reporting in and I fully support this treaty. I am starting to get comfortable with the idea of not having to get repaired or fight others on an almost daily basis. I will miss the good ol' days of Ramjet making up his headcounts while Dirge and I snickered along. Speaking of which, anyone have optics on those two?" There's a pause, "Did they get sent away on a fun mission to that theme-park-planet without me again? Anyway, Lord Scarstream, I am happy to be working under your guidance during this time. Thrust out!"

Thrust was formerly played by Sci-Fi until 2013.