This page is for the Autobot warrior. For the Screaming Eagle, see Tank (Extreme). 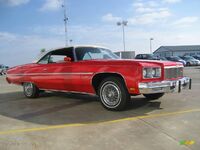 TANK is known to his comrades as a stout and courageous fighter, and is generally thought of as a fine mech to have on your side in a fight. Sturdy of design and strong of will, his frame can withstand levels of punishment that would leave many a Cybertronian soldier laying on the ground and waiting for a medic. He arrived on Earth in a small scout craft, which crash-landed in the American Midwest after running afoul of problems during the time Cybertron was in close proximity to Earth in 1984. After laying dormant for many years, he awoke to find a human mechanic trying to patch up the battered Chevrolet Caprice he'd found seemingly abandoned not long after the scout craft's emergency systems had remade him in said vehicle's image. In robot mode, TANK is armed with a powerful Proton Cannon, as well as a host of secondary weapons. In Chevrolet Caprice mode, TANK is similarly armed, with slightly more maneuverability and speed. While generally friendly, minor damage to his laser core resulting from the crash can send him into a rage when defenseless people are harmed.

Tank was one of the countless front line fighters on Cybertron during the eons of war between the Autobots and Decepticons. He was an ideal soldier, willing to do whatever was asked of him, though he never got any accolades for his service. He was just a basic member of the Autobot army; nothing special. When the Ark was launched and followed by the Nemesis, Tank was on Cybertron, waist-deep in Decepticons, fighting the good fight. He barely knew that anything of import was happening until much later.

9 million years later, he was still fighting and doing what he did best. When the ark reestablished contact with Cybertron, Tank decided to join his commander on Earth, hoping that maybe there, his efforts would be seen and commended by the legendary Optimus Prime. He set out in a small craft during the time Cybertron was close to Earth. But something went wrong. The spacecraft malfunctioned due to the intense gravitational and radiational effects of the two planets being so close. It went down, falling into a pond somewhere in the Midwest. It went unnoticed due to the more immediate concern. The shuttle was badly damaged, but the conversion system was mostly operational. It managed to convert Tank's first mode, the non-combat mode, into an Earth vehicle. However, before it was able to finish the second mode, the water from the pond shorted the system out, leaving Tank with a very odd looking second mode.

In 2004, a severe drought left the small pond entirely drained, and it was then that a young man found Tank in his Earth vehicle mode, an '88 Chevy Caprice. The man towed the damaged Autobot back to his home and began to repair it. He quickly discovered what Spike and Sparkplug Witwicky had discovered: that a Transformer is not nearly as simple to repair as a normal car. Still, he tried, and in the end, he got Tank to a semi-operational state. Grateful for the help, Tank thanked the man. It was the beginning of their friendship, as well as Tank's love for Earth life. He began to see that these Earthlings had a wonderful thing, and when he heard that many had died from the conflict, he was outraged. Part of it was from the friendship, and part of it was from some lingering damage to his central memory core from the crash landing. After that, he attempted to fight off some Decepticons, but since he still had damage remaining that the human couldn't fix, he was beaten and forced to retreat. It was then that Tank decided to leave the company of his friend to seek out the Autobots, despite his uncertainty that they were still the 'good guys'.

Tank returned to the Autobots in 2010.

Hey, yo, guys, Tank here. Been a while since I been around, I know, I'm sorry. Had a serious case of oldtimer's, went into a good stasis lock. But, hey, I'm back. If ya need some old-school muscle or firepower, look me up. Tank, out.

Tanks was created and is played by transfan1.