View source
The name or term Takedown refers to more than one character or idea. For a list of other meanings, see Takedown (disambiguation). 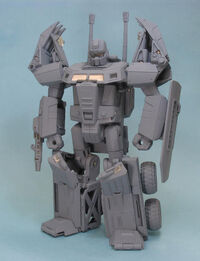 As Chief Security Officer for the Decepticons, TAKEDOWN specialises in both physical security and counter-intelligence. She is both a computer whiz and a powerful physical presence. She can take down an unauthorized intruder in seconds, without harming them, while at the same time wirelessly blocking a virtual invader. In robot mode she is armed with a host of non-lethal stun weapons she is quick to use in any situation. As a Manta Riot Control Vehicle, TAKEDOWN is the ultimate crowd and riot control vehicle; her many systems are designed to safely end potentially dangerous situations. In this mode she is fully armored and is equipped with dual anti-riot water cannons as well as many other features. Although physically intimidating at first glance, TAKEDOWN is very boisterous and friendly to people she likes. As a member of the Dominicons, TAKEDOWN combines with her teammates to form Taracon.

Takedown was hand-picked to become a member of Illarion's esteemed team of decorated specialists.

Takedown is a current member of the Decepticons' Assault Infantry division, and head of Decepticon Security on Cybertron. She's recently been tasked with rooting out sedition in the Decepticon ranks.

Member of the Shattered Glass Dominicons, an TP-Only gestalt team on TFU. She transforms into a riot-control tank.

This character is available for temping in the Shattered Glass TP.