This page is for the Shattered Glass universe evil Autobot character Taifeng. For her good main-universe version, see Typhoon. For the admin who plays her, see Bzero. 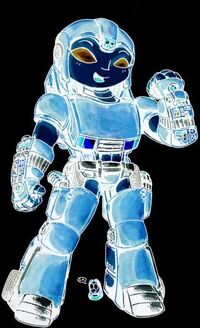 Nowhere is more of a home to TAIFENG than the cities and tunnels of Cybertron. An urban explorer, in her short time online she’s already discovered new paths across and through the planet. A very social urbanite, she enjoys the company of most other Autobots, especially her respected commander, Stormwind. She prefers sophisticated company, but is never one to turn down the thrills and vices of the city -- especially when she's bored, which is often. An ace pilot, she’s often relied on to fly Autobot shuttles during combat missions.

As a Weatherbot, she's equipped with full Doppler and Nexrad weather tracking equipment, along with a roof aerometer in her Land Rover Discovery mode. In Land Rover mode, her roof is bristling with meteorological equipment. Intended as a coastal-storm expert and trained along the Rust and Mithril Seas, she is built to withstand gale-force winds and crushing waves. She is armed with a whirlwind gun in robot mode, as well as paired Weatherbot laser pistols. She is heavily armored, with a ram plate and towing winch in Land Rover mode. In this mode, she is also equipped with twin top-mounted rocket launchers, and hood-mounted laser batteries. Whenever she can, she merges with the other Weatherbots to form EF-5, as the left leg.

While very smart and good at her job, she doesn’t really like the idea of backward, dirtball Earth, and hopes its conquest will be quick so she can remain on Cybertron.

Built in 2007 by Wheeljack. When the TP began, Taifeng and the other Weatherbots were waiting for their first deployment to Earth.

In the meantime, Taifeng had been studying and updating maps of Cybertron, looking for weak points to defend and strike. When the Ark left without the Weatherbots, Taifeng was secretly pleased, since she far prefers the urban environments of Cybertron to the seemingly backwater Earth.

Taifeng was later involved in the fight to defend Cybertron from a horde of invading Junkions.

In 2013, the Weatherbots were moved to the Autobot Infantry division.

In 2016, Taifeng helped Jetfire prepare for his ascension to Autobot Emperor of Destruction.

bzero is playing evil Typhoon in the TP.