"If you think sky-diving to Earth from a plane is dangerous, try doing it from a Cobra Invader in low orbit!"

These terror troopers are deployed into orbit from Cobra Invaders wearing specialized, self-contained space suits. The suits contain ceramic composite heat shielding armor that provides coolant safety during atmospheric re-entry. When two or three of them return to Earth at the same time, they are often mistaken for a meteor shower - until they start shooting like typical Cobra terrorists! They are considered to be formidable battle opponents with exceptional firepower capabilities, so next time you see a meteor shower, it might be a good idea to stand beside a G.I. Joe...just in case.

T.A.R.G.A.T.s were given upgraded equipment and training in 1993.

TARGATs are available as DCs and OCs. 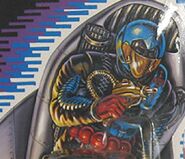 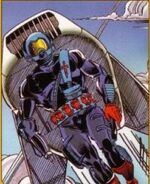