This page is for the "evil" Autobot Dinobot. For his "heroic" counterpart, see Swoop.

Swoop is a... possibly evil Autobot Dinobot from the Shattered Glass universe. 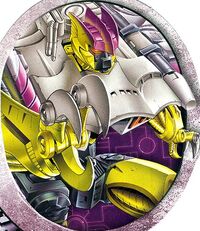 Swoop is a joyful, friendly Dinobot who just wants to be your friend! He wants to love you and hug you and squeeze you and take you for flying trips and you're going to be bestest friends forever because he's so happy to see you! He especially wants you to meet his new awesome super best buddy Jazz, wheeeeee!

In flying mode, Swoop can soar up to 250 mph. Under each wing he carries an air-to-air missile launcher. Each missile is the equivalent of 5000 lbs. of TNT. Although the missiles have a range of 8 miles and are very accurate, Swoop's specialty is swooping down to low altitudes and releasing them virtually point blank at their targets, and then speeding away. In Autobot mode he can also use the launchers, as well as a thermal sword, which, by heating up to temperatures of 4000 degrees Centigrade, can slice through most materials by melting through them as it passes.

Although he's extremely maneuverable and has great endurance due to low fuel consumption, Swoop is vulnerable to enemy firepower due to the relatively fragile nature of his wings.

After the Dinobots arrived and got loose, the Autobots decided to chase some of them down in the hopes of reprogramming them as troops. Jazz and Goldbug were able to track Swoop to an old observation tower, where they were then joined by Rodimus and Blurr. Jazz wanted to just shoot the "flying monster", but Goldbug pointed out that Optimus Prime wanted it alive. They put it to a vote that the reluctant Jazz should be the one to climb the tower and capture Swoop, their decision backed up by pointed weapons.

Swoop thought the visit from Jazz was the best thing ever, and happily took his "new friend" for a joyride clasped in his claws, much to Jazz's extreme dismay. Goldbug ended up getting Jazz down by shooting Swoop's wing, causing them both to fall to the ground. Swoop was overjoyed that Jazz had broken his fall, saying he loved his new friend for doing that. A squished Jazz told Swoop to shut up and groaned that he hated everybody at that moment.