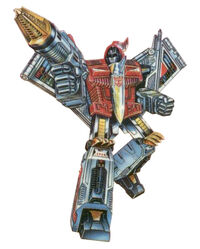 Making a spectacular descent from the sky, Swoop watches with unhidden glee as his enemies scatter in terror before his looming presence. And that's just the way he likes it because he knows fear is a more effective weapon than any equipment he carries. Fear is also his greatest friend. His ability to cause it in others is the sole comfort he derives from the form generally considered the most horrifying of all the Dinobots. Even his comrades shy away from him. And that is Swoop's tragedy. When Wheeljack built his Autobot body to resemble that of a pteranodon's, he gladly accepted the form as his contribution to the Autobot cause. Little did he know back then that the good-natured, kind mechanoid that he was - and still is - would be disguised as well.

In flight mode, Swoop can soar up to 250 mph. Under each wing he carries an air-to-air missile launcher. Each missile is the equivalent of 5000 lbs. of TNT. Although the missiles have a range of 8 miles and are very accurate, Swoop's specialty is swooping down to low altitudes and releasing them virtually point blank at their targets, and then speeding away. In Autobot mode he can also use the launchers, as well as a thermal sword, which, by heating up to temperatures of 4000 degrees Centigrade, can slice through most materials by melting through them as it passes.

Although he's extremely maneuverable and has great endurance due to low fuel consumption, Swoop is vulnerable to enemy firepower due to the relatively fragile nature of his wings.

Pleased with the overall success of the original three Dinobots, Optimus Prime commissioned the construction of two additional members: Snarl and Swoop. The new duo made their combat debut against Ironhide, Bluestreak, Sideswipe, and Prowl in a field test which the robotic dinosaurs passed with flying colors. Snarl and Swoop did battle with the original Dinobots (who were fooled by Megatron to go rogue), but were only strong enough to force them into a stalemate. The original Dinobots chose to return to the Autobots after their leader, Grimlock, was saved from the exploding meteorite through a selfless act of heroism from Optimus Prime. War of the Dinobots

Swoop later assisted his fellow Dinobots in limiting the amount of damage done by an incoming tidal wave by transporting logs to Snarl, who planted them into the ground to serve as an additional barrier against the raging wave. The Ultimate Doom, Part 2

Some time after that, the Dinobots chose to desert the Autobots during their time of need (the Autobots were dying from lack of Cybertonium) and go to Cybertron. Sparkplug, Spike, and Carly sought out the Dinobots to convince them to help, but Grimlock, angered that they had been followed, decided to crush them. Swoop, however, saved them, wanting to hear the "brilliant part" from the humans. Grimlock was convinced to go, but instead led the Dinobots to Cybertron itself. Desertion of the Dinobots, Part 1

All the Dinobots were captured by Shockwave, reprogrammed and forced to work in the cybertonium mines at the planet's organic core. All, that is, except for Swoop. Swoop soon encountered Spike and Carly, the Autobots' human allies, deep within the bowels of the planet. The three teamed up and, after learning a brief history of the Transformer race, freed the Dinobots and returned to Earth with a shipment of Cybertonium. Desertion of the Dinobots, Part 2

Retrieved from "https://tfumux.fandom.com/wiki/Swoop?oldid=77236"
Community content is available under CC-BY-SA unless otherwise noted.