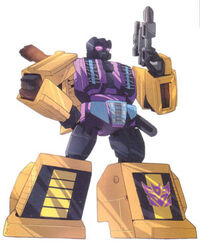 Don't let SWINDLE's big-eyed, easy-going, good-natured personality fool you; within him beats the fuel pump of the most greed-driven street hustler. Without blinking an optical sensor, he'd trade Decepticon leader Megatron's right arm for a toaster if he needed the toaster badly enough (and if he could get the arm off of Megatron!). He is an opportunist without peer. He thrives on wheeling and dealing and seemingly is capable of procuring anything to fulfill the design and equipment needs of his armaments work. Although the weapons he builds are much appreciated, his fellow Combaticons know that Swindle's efforts on behalf of the Decepticons are a mere sideline to his actual purpose: He is solely concerned with himself, and most of his entrepreneurial activities are for his own personal material advancement. If he thought it were in his interest to trade with the enemy, the Autobots, he probably would. He is truly a one-robot "black market."

Perhaps Swindle's greatest talent is his gift of gab. He could probably sell oil to an Arab sheik, if given the chance. In both FMC XR311 combat support vehicle and robot modes, he uses two weapons: a scatter blaster that shoots bursts of explosive buckshot-type pellets over a wide area, and a gyro-gun that disturbs the balance centers of Transformers, severely hampering their driving, flying, and/or walking. With his fellow Combaticons, Swindle combines to form the giant robot Bruticus.

In jeep mode, Swindle can't handle sharp turns at high speeds very well and is prone to overturning. Although his exterior is fairly well armored, a direct hit on his unprotected open dashboard can easily disable him.

Swindle was originally a Decepticon criminal on Cybertron who apparently got caught and had his personality component locked in a detention center, where he was stuck for millions of years. He was eventually liberated along with five other prisoners by Starscream, who installed Swindle into an old military jeep found at Guadalcanal on Earth. Starscream dubbed the Decepticons "Combaticons" and ordered them to help him defeat Megatron. While Swindle and the others were not too happy with this, Starscream blackmailed them into it anyway. The plan eventually failed, and Swindle and the Combaticons were banished to an asteroid along with Starscream.

The Combaticons later escaped the asteroid and attacked Cybertron together as Bruticus. After being defeated again, Swindle and the Combaticons were reprogrammed to be loyal to Megatron. It's debatable how well that reprogramming took with Swindle.

Megatron next ordered the Combaticons to steal fighter planes by using Middle-Eastern criminals as go-betweens. Swindle was the personal ride of Ali, the thief leader, and led the caravans with parts to Megatron. He later merged with the others to form Bruticus, who was defeated by the Aerialbots as Superion.

Bruticus was next defeated by Defensor, and Swindle was the sole survivor of the team. He proceeded to sell the parts of his comrades to various people for a sweet finder's fee. Megatron was less than happy with this, however, as he had just constructed a giant death-ray for Bruticus to wield for him. No Combaticons, no Bruticus.

Swindle tried to plead off his greed as a programming flaw, but Megatron wasn't having any of it. He installed a bomb in Swindle's head and gave him 15 hours to rebuild his fellow Combaticons or suffer their fate. The most elusive piece was Brawl's personality component, which had been raided from a junkyard by some high school kids building a homemade robot. Swindle had to fight through a trio of Autobots in order to recover the personality component, but succeeded in time to have the bomb removed.

Swindle is plainly a team player.

Swindle is an active member of the Combaticons on Earth.

On the MUX, Brawl developed a game called "shake," where he'd pick up Swindle and hold him upside down, shaking him until something of value fell off or out of him. He occasionally got angry about something Swindle stole from him vorns ago, but felt sorry for Swindle when a "morality swap" virus rendered the munitions expert unable to lie.

In 2006, Swindle and Vortex attacked Fort Knox, but we driven off by the US forces there with the assistance of Weaver Delta.

In 2020, Swindle was freed from the Combaticon Loyalty Programming, but in the process lost his ability to hold silent his inner monologue.