This page is for the evil hunter/destroyer Sweep Two. 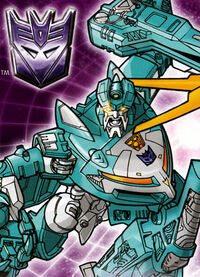 SWEEP TWO is a Close Combat Specialist working for the Cult of Galvatron. Like all the other warriors in the Sweep army, SWEEP TWO was created using parts from the bodies of deactivated Decepticons. However, after being left for dead during the Sweeps' initial battle on Cybertron, SWEEP TWO was found by Obsidian and recruited for the cause. While other Sweeps generally prefer using energy and ballistic weaponry, SWEEP TWO prefers to use his knowledge of Cybertronian martial arts to enforce Unicron's will. He is extremely disciplined and believes that following orders is paramount to everything else. He represents the most brutal aspects of Obsidian's personality and fulfills his role with no remorse. Obsidian often relied on him to keep the other cultists in line, and SWEEP TWO's mere presence is often sufficient to reach this goal. SWEEP TWO is an expert in the use of his dual electron blades. He is often seen using them to dispatch his enemies instead of utilizing his array of energy weapons. This is both a strength and a weakness as he will sometimes opt for close combat when ranged combat would be the more tactically sound option.

Sweep Two was created from the wreckage of an unfortunate Decepticon long-range patrol that ran afoul of Unicron. Created in 1997 by Unicron, the Sweeps' first battle was on Cybertron on the way to Earth. Losing a few of their members in that initial clash, the Sweeps nevertheless continued on to Earth, where they battled the combined forces of Megatron and Optimus Prime, ultimately facing defeat and joining up with the Decepticons.

SWEEP TWO was found by Obsidian and recruited for the cause.

Two sword his loyalty to Cryotek, and was tasked with hunting down former cult members released on Cybertron by Windshear, recruiting or silencing them depending on their attitude and worth to the cause. When Galvatron finished his orbital retransformation ray, he assigned Sweeps Two and Six to guard it. When Optimus Prime came with Aegis to claim it, Two fought Optimus, and got an ax to the head because of it. Two was brought to Iacon for repairs, and remains in their custody.

In 2016, Sweep Two was reactivated by Blaster and questioned by Punch.

Sweep Two is available for application.