Transformers Universe MUX
Register
Don't have an account?
Sign In
Advertisement
in: Article stubs, Characters, Acolytes of Unicron,
and 7 more

This page is for the evil hunter/destroyer Sweep Six.

The name or term Six refers to more than one character or idea. For a list of other meanings, see Six (disambiguation). 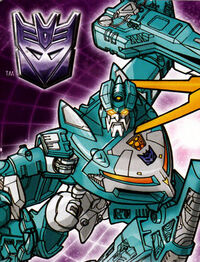 SWEEP SIX is a Tactician for the Cult of Unicron. Like all the other warriors in the Sweep army, SWEEP SIX was created using parts from the bodies of deactivated Decepticons. However, after being left for dead during the Sweeps' first battle on Cybertron, SWEEP SIX was found by Obsidian and recruited for the cause. SWEEP SIX is the most skilled tactician among the Cult of Unicron. He is always quiet, calm and self-spoken. This disposition should not be taken as a sign of weakness, however. Underneath his muted exterior is a strong, calculating mind. He sees the Autobot/Decepticon conflict as a carefully planned series of tactical decisions. Obsidian often consulted him on planning missions for the Cult Sweeps, and it is a role he executes with grim determination. Utilizing finely-tuned sensors and communications equipment, he often creates three-dimensional battlefield images and transmits them to other warriors as he flies over the combat zone. Sweep Six lacks patience for those whom he deems his intellectual inferiors and has been known to lash out against them. This sometimes causes friction with other Unicron cultists.

Sweep Six was created from the wreckage of an unfortunate Decepticon long-range patrol that ran afoul of Unicron.

Created in 1997 by Unicron, the Sweeps' first battle was on Cybertron on the way to Earth. Losing a few of their members in that initial clash, the Sweeps nevertheless continued on to Earth, where they battled the combined forces of Megatron and Optimus Prime, ultimately facing defeat and joining up with the Decepticons.

However, after being left for dead during the Sweeps' first battle on Cybertron, SWEEP SIX was found by Obsidian and recruited for the cause.

With the seeming death of Obsidian, Cryotek slowly took over cult command and resources.

When Galvatron finished his orbital retransformation ray, he assigned Sweeps Two and Six to guard it. When Optimus Prime came with Aegis to claim it, Six fought Aegis, and was forced to retreat. He returned to the former base of the Cult of Galvatron, hiding out with the small number of survivors of the broken sect.

When The Fallen returned, Sweep Six was quick to ally himself with him.

In 2019, Six spied on Dust Devil and tried to kidnap Soundwave, but was driven off by the Dust Devil/Soundwave team-up in Harmonex.

Later that year Sweep Six was killed in the reformatting of Tyger Pax by Incognito.

Sweep Six is dead, and therefore no longer available for application. He is @emitted by Typhoon's player.