This page is for the evil hunter/destroyer Sweep Seven. 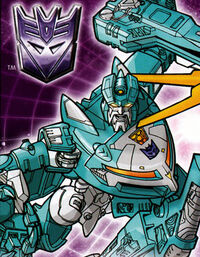 SWEEP SEVEN is a weapons engineer working for the Cult of Galvatron. Like all the other warriors in the Sweep army, SWEEP SEVEN was created using parts from the bodies of deactivated Decepticons. However, after being left for dead during the Sweeps' first battle on Cybertron, SWEEP SEVEN was found by Obsidian and recruited for the cause. Other cultists often had trouble maintaining conversations with Sweep Seven due to his tendency to walk off, deciding his time is better spent developing some new weapons system for the cult. Obsidian relies on him to keep the weaponry used by the cult the most current and lethal available. Sweep Seven sees weapons development as an intellectual challenge and grows quickly bored once a new weapon had been developed. Obsidian often sees Sweep Seven as an extension of his own intellect and creativity and uses him accordingly for the benefit of his cult forces. When called into battle, Sweep Seven is often eager to test his new weapons, but they sometimes backfire on him.

Sweep Seven was created from the wreckage of an unfortunate Decepticon long-range patrol that ran afoul of Unicron. Sent to Earth, Sweep Seven was originally subservient to the Chaos God, but was believed killed by Optimus Prime during Unicron's attack on Earth.

Sweep Seven was believed killed in 1997. However, after being left for dead during the Sweeps' first battle on Cybertron, SWEEP SEVEN was found by Obsidian and recruited for the cause. In 2014 Sweep Seven came to Earth to oversee Obsidian's mad plan to build a giant clone of Galvatron.

When Rumble attacked the Cult's Canadian mountain base, Seven emerged with many of the other cult members, and was attacked and confronted by Sweep Sunder. The two battled on the side of the mountain, and after exchanging words and blows Seven was forced to retreat back into the cult base.

In July, Obsidian was ready to unleash his Giant Galvatron. Sweep Seven joined the attack, to provide backup and tech support, if needed. Seven initially attacked Scourge, but was set upon on all sides, and eventually torn apart by Scourge's Sweeps. They kept Seven's core, so there is a chance that he may one day live again.

Sweep Seven is available for application.