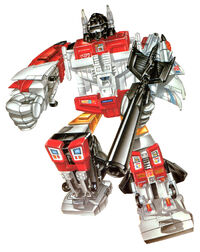 Superion is a fierce and frightful machine. As the collective consciousness of the five Aerialbots, Air Raid, Skydive, Fireflight, Slingshot and Silverbolt, he might find it confusing and unproductive to assimilate each of his component personalities into one. Therefore, he suppresses much of what is potentially more than he can handle and directs his thinking to one primary purpose: the destruction of the Decepticons. That's about all he's good for. Little else interests him; he's unlikely to even engage in conversation about anything else. The other Autobots take this to be a cold and aloof attitude, as if Superion held himself above them. In truth, it is the most Superion can give of himself.

Superion can fly at speeds up to 800 mph. His range is 5800 miles. His strength is formidable; he can demolish a battleship with one blow. The stress fracture cannon he carries shoots a beam that locates and then overloads the natural fracture lines in any object it hits. The result can be anything from cracking open a peanut shell to causing a small earthquake.

Superion finds it difficult to adapt to new situations and to be innovative. His thought processes are too primitive to allow for such higher mental functions. This often restricts him in battle. Although incredibly strong and resistant to most artillery and beam weapons, he does have certain "pressure points" - areas of structural weakness where one component Aerialbot connects to the next - that are particularly vulnerable to attack.

Silverbolt showed the rest of the Aerialbots how Sparkplug was able to disregard his fatigue out of concern for Omega Supreme's well-being, thus demonstrating to his teammates that humans were worth saving. With that knowledge, the Aerialbots joined the Autobots in battle against Megatron's Stunticons. The Decepticon leader, seeing his new warriors being outmaneuvered, ordered them to merge and form Menasor. The Aerialbots countered to form Superion.

At first, Superion was able to match Menasor, but the Decepticon combiner's sheer aggression soon saw the Autobot on the defensive until he was trapped. As Menasor moved in for the kill, the newly-repaired Omega Supreme suddenly appeared, helping Superion get free. Together, they defeated Menasor and sent the Decepticons into retreat.

Weeks later on Cybertron, Superion had to fight against a damaged Guardian robot, whose immense strength pinned the Autobot down until he managed to knock the drone into the sky, destroying it.

A battle in the Middle East pitted Superion against Bruticus. They were evenly matched but Superion won by separating just as Bruticus charged him (and fell into an oilfield).

While defending the Statue of Liberty, Superion got a second attempt at defeating Menasor. This battle went a lot better for him, as he singlehandedly defeated Menasor and destroyed Megatron's Lightning Bug weapon.

In September of 2009, Superion battled Megatron in Chicago.

As a Gestalt, Superion is usually played by the five players that make up the Aerialbots.

In the Shattered Glass universe, Superion is an arrogant jerk, who (with some jusitification) believes he is the fastest, smartest, and strongest gestalt there is.