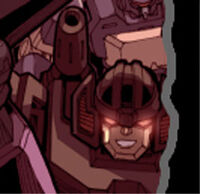 "They can't beat the best."

Sunstreaker is the complete egotist. He feels he is simply the most beautiful thing on Cybertron. He is constantly discussing his sleek lines, his aerodynamic styling and he is loudly and continually grateful to Primus for giving him such a magnificent body. Sunstreaker is faintly contemptuous of most other Autobots, particularly his fraternal twin Sideswipe, and especially since Sideswipe defected to the Decepticons. When he is in his robot mode, Sunstreaker is one of the most dangerous, most ruthless of the group; a calm, competent war machine. His biggest fault is his tendency to stop so that people can admire him when he ought to be tending to business.

In Autobot mode, Sunstreaker wears a right shoulder-mounted, laser-guided, ground-to-air missile launcher. Each missile is the equivalent of 450 lbs. of TNT and can down a Decepticon jet fighter at a maximum distance of 37.5 miles. He also carries an electron-pulse gun capable of emitting at 300 bursts per second a beam of highly energized electrons (the high rate of emission makes it effectively a continuous stream of electrons). A sustained burst of 1.5 seconds will burn a 3 inch hole in a .5 inch-thick plate of titanium-alloy steel. His upper torso construction incorporates a tough polymer-steel skin, making him particularly resistant to artillery fire.

A potent arsenal and tough hide like Sunstreaker's would be sufficient to preclude any serious weaknesses, if it weren't for his ego and sociopathic tendencies. His overriding lust for battle is of great value to the Autobots, but inability to be a team player and the ease with which he can be baited by anyone, including adversaries, often puts his well-being in serious jeopardy.

Sunstreaker was one of the earliest Autobots, having joined Optimus Prime's army in his initial sweep of the Cybertron|planet.

Sunstreaker will remain in the background of the Shattered Glass TP unless someone wants to temp him.

Sunstreaker is available for temping.