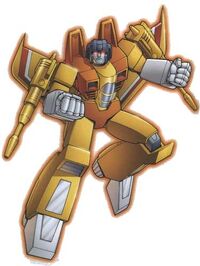 Created with a built-in fusion reactor running at higher than original efficiency, SUNSTORM can use it as a weapon to generate intense light and heat or powerful electromagnetic waves. These energy emissions are constantly radiating from his body, inducing negative effects in his nearby teammates' internal systems, so he is only rarely included in unit activities unless he provides rigorously secure shielding.

Sunstorm's unique condition has bred in him a zealous belief that his strength and abilities derive from some mystical source, and that the potential immensity of his power is indicative of some supernatural endowment. He will often make rambling statements that appear to his fellow Decepticons as nothing more than senseless babble, but the truth to these outbursts is far more disconcerting: Sunstorm is nearly convinced that he is in fact a living god!

In vehicle mode, Sunstorm's top atmospheric speed is just under Mach 2.4, though he is capable of reaching interstellar velocities well in excess of 16,000 kilometers per hour. In truth, he is capable of space travel at speeds that are virtually immeasurable, based on the untested capacity of his power core. He wields two mass driver cannons in robot mode which fire high-speed projectiles capable of punching though most types of advanced Cybertronian armor. In jet mode, he is armed with two heat-seeking missile launchers. When Sunstorm is able to maintain full control of his reactor core, he is capable of using it to generate incredibly powerful bursts of electromagnetic radiation.

Sunstorm's peculiar habits, in addition to the deleterious effects that he is capable of causing teammates by his sheer presence, frequently causes him to be excluded from official missions. In jet mode, he rarely employs his own heat-seeking missiles - on the occasion his target evades their reach, the missiles are liable to turn back and target his own substantial heat signature. Since Sunstorm is secretly convinced he is a supernatural being, his frequent flashes of bizarre speech and behavior tend to keep his comrades at an excessive distance.

Sunstorm's original manufacturing took place during a fierce period of insurgency in one of Cybertron's chief industrial sectors. As the result of a riot at a nearby power substation, quality control was disrupted along the assembly line for Sunstorm's model type, and a host of electromagnetic anomalies crept into his individual design. These anomalies produce a continual cascading effect in Sunstorm's primary fusion reactor, allowing it to operate at power levels that are far greater - and far more hazardous - than those of his fellow Decepticons. Consequently, Sunstorm is engaged in a near-constant struggle to control the energy emissions that radiate from his superstructure, lest they cause severe damage to the systems of those around him.

Sunstorm was one of the Decepticon jets on Cybertron four million years ago. He shot at the Autobots Wheeljack and Bumblebee when they came near, but the Autobots managed to escape.

Sunstorm was given a Terran altmode in 2003, for missions on Earth.[1]

Sunstorm went AWOL for several months during the Luminous TP in 2007. When he returned, his was punished for his absence, but no treachery could be proved against him, so he re-joined the Decepticon ranks. Cyclonus and Shockwave continue to keep a suspicious optic on him.

In 2011, Sunstorm ran into Benin-Jeri and Cuffs on Cybertron, and attempted to apprehend or kill them. However, the two Autobots bested him in combat and escaped.

In 2013, Sunstorm responded to Starscream's summons to defend Polyhex. Ramjet, Starscream, and Sunstorm were shot down during a raid on Quintesson-controlled Polyhex. They were taken into a torture chamber and held until the Dweller suddenly tore through the ship, accidentally dragging the Seekers along with it for the ride. The Dweller tore through the ship’s Space Bridge into the Space Bridge Hub.

Once there, the Dweller went nuts and started destroying the Hub. Starscream realized the entire thing was going to blow, so he grabbed the other two Seekers and jumped through one of the portals before everything went to the Pit. The Space Bridge exploded, destroying the entire Quint structure the Decepticons just escaped. They had arrived on a Quintesson prison planet and were stuck there.

After untold adventures, the Seekers stole a ship and headed back to Earth. Only then did they realize that when the Space Bridge Hub blew up, the resulting feedback tore through all the Quint Spires attacked to it, not just the one in which they arrived. Whatever lured the Dweller to Polyhex facilitated the destruction of the entire Quint attack network, saving Cybertron and Earth.

Sunstorm was then sent into the Manganese Mountains to round up escaped Sharkticons. In 2014 he was called back to Earth to recover a needed component from a near-meltdown nuclear reactor.

In June of that year Sunstorm and Windshear went undercover, pretending to join the cult of Galvatron. When the cult was ready to unleash its Giant Galvatron, Sunstorm pretended to attack Thundercracker, maintaining his cover while Windshear was still surrounded by cult members. However, once Windshear made the decision to attack Obsidian, Sunstorm dropped the charade, and attacked Super Galvatron, severely damaging it and setting it up for Megatron to finish it off.