This page is for main-universe scaredy-cat version of Subsea. For his evil Shattered Glass universe equivalent, see Subsea (SG). 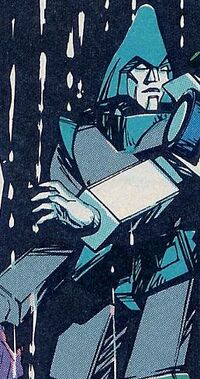 Rebuilt into a futuristic submarine, Subsea was given extensive training in underwater demolitions and warfare - not that it has helped his combat prowess one bit. Under fire, Subsea is like as not to lose his cool and fear for his death rather than respond with lethal force. His tendency towards pathetic gibbering panic has kept him from graduating from the Autobot Naval Academy, and his supervisors are on the brink of assigning him to the Wreckers just to get rid of him. They know that Subsea is easily swayed, and that he goes to pieces under pressure. Unfortunately neither quality bodes well for his long-term survival.

Subsea’s head is looks like it might be the front of a submarine or a boat. He has fins on his arms and his legs, and is Minibot-sized overall. When on land and out of danger, he looks like a young, eager Autobot cadet. Put him in danger, however, and he immediately goes to pieces.

Autobot Military Academy cadets Subsea and several others were persuaded by Flattop to undergo a rite of passage in Cybertron's treacherous Underworld. Once there, they found it populated by violent, malformed mutants. Subsea went into a gibbering panic, and was nearly blasted into oblivion by Warhead. Underworld! Flattop and Subsea escaped, but Subsea has been nervous and twitchy ever since.

Subsea is from Crystal City.

Subsea's tendency towards pathetic gibbering panic almost kept him from graduating from the Autobot Naval Academy, and his supervisors were on the brink of assigning him to the Wreckers just to get rid of him.

In 2014 he graduated the Academy and was sent to Earth.

In 2016 he travelled to Cybertron to help hunt Seacons in the sewers of Ibex, complaining the entire way. However, when his noisiness tipped off the Seacons and they ambushed the Autobots, Subsea fled, leaving his team behind. He was subsequently hunted down by Seawing, poisoned, and tortured before being left for dead. Subsea was rescued by Seaspray, but has yet to have recovered from his ordeal.

Subsea is temped by BZero.

In the Shattered Glass universe, SUBSEA is an arrogant, take-charge kind of bot, always bossing people around and throwing himself into the fray. He always saw himself as leader of the Wreckers someday, and was dismayed when the Wreckers were wiped out before he had a chance to join their august mercenary ranks. As a high-tech futuristic submarine, Subsea is one of the few Autobots skilled enough to brave the both the Mithril and Rust Seas, and he never lets any of the other Autobots forget it. He also loves to bring gangs of Autobots down into the forbidden Underworld to prey on unsuspecting mutants, and he hopes to be deployed to Earth so he can kill a few humans there, too. The only group he fears is the Autobot femmes, after witnessing some of their handiwork firsthand. In their presence he’s meek and subservient, although he has dark plans for them as well.