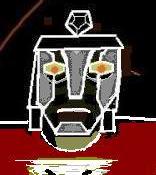 STORMFRONT was built to lead – literally. Reconstructed by Alpha Trion to be a commander in Optimus Prime’s conquering army, STORMFRONT is hard-wired to be a calm, ruthless battlefield leader. STORMFRONT’s hover car mode is jet propelled with large rockets allowing for high-speed bursts to get him out of danger. His twin side guns, available in both forms, allow him to fire while his fans kick up cover for those under his command. To protect his troops, he has a force field that allows him some defense from both the debris that he kicks up and any crossfire he attracts. If the crossfire is too heavy or he is wounded before he can escape, he is more than willing to sacrifice himself for the good of his troops, although he’d rather send his enemies to their maker first. STORMFRONT's rotors are what keep him aloft with two main fans for lift, a set of smaller fans in the front and back for propulsion, and side fans for stability. Maneuverability is not a problem for this Autobot. Between the rockets and all the dust, it can be a challenge for some of the best sharpshooters to hit him. In robot mode he is able to exchange his hands for fans to allow him to create cover in other situations. He also possesses a loud, booming voice, capable of being heard over almost any battlefield din.

In the Shattered Glass universe, Stormfront was built by Alpha Trion to serve Optimus Prime, and remains a member of Prime's inner circle even after Trion himself was exiled.

Due to his unique position in Emperor Prime's command structure, Stormfront can get away with a little more cheek than most Autobots. However, his association with the traitor Alpha Trion limits how far he can buck authority.

When the Ark launched, Stormfront was on board, and made the trip to Earth with Emperor Prime. He was present during the fight between Jazz and Jetfire, although he was careful about displaying his allegiance before a winner was declared.

Stormfront is played by Dust Devil.