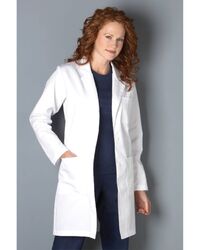 Stitches is an old face returned recently from a stint teaching medical officers at the USUHS. Her nickname was earned during her own time in medical school, a reflection of the precise and delicate operations she excelled at. While she is not heavily armed or armored, she is well trained. Her goals are simple; to protect and serve... and also to patch up those unable to dodge bullets.

After joining the Joes, Stitches took several years off to medical officers at the USUHS. She returned to the Pit in 2015.

Stitches' given name is Elizabeth.

At one point Stitches was involved with Hawk; a relationship which ended when she left the Joes for several years to teach.

Stitches is an OC played by her creator, Peggy.

Retrieved from "https://tfumux.fandom.com/wiki/Stitches?oldid=52558"
Community content is available under CC-BY-SA unless otherwise noted.