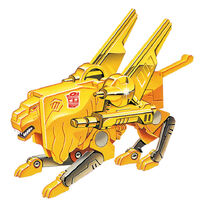 When Steeljaw is on the hunt, his prey is as good as caught. His unyielding determination and tenacious pursuit combine to make him a truly formidable Autobot. He handles each mission with a cool professionalism born of the great confidence he has in his abilities. When he's not busy stalking Decepticons, he's likely to turn his attention to any scent that comes his way - the spoor of a mouse, the stench of a garbage truck, even the perfume of a young woman. This often results in a frightening surprise for his unsuspecting quarry. Steeljaw usually doesn't mean any harm on these occasions - he just likes his work so much that it's also his hobby.

In lion mode, Steeljaw uses an array of chemical receptor microchips in his nose module to locate and follow scents. The array is sensitive enough to pick up chemical traces in the air as faint as one part per trillion. He has a range of 800 miles and requires little rest or maintenance. His jaw has tremendous strength; anyone caught in its grip would find it next to impossible to break. It can exert a force of 60,000 psi and can snap a foot-diameter steel cable. In cassette mode, Steeljaw can electromagnetize himself so he can adhere to ferrous objects. He uses this ability to hitch rides over long distances in a form that won't attract much attention.

Steeljaw must avoid wet environments since his body is particularly vulnerable to rusting.

Steeljaw was an independent operative on Cybertron who joined Blaster's tape corps when he arrived on Earth and was rebuilt to a micro-cassette tape.

Before transferring to Earth and getting rebuilt as a golden lion, Steeljaw was a cybercat on Cybertron. The AllSpark Almanac II

Steeljaw is one of the more formidable members of Blaster's tape corps, and often works alone, reporting in only when necessary.

Later In 2004, NASA was attacked by Soundwave and his cassettes. They were run off by Steeljaw and Wa-n'Da, but not before kidnapping Professor Zimram Straussfrig, an expert in the field of advanced energy collectors.

In 2012, Steeljaw was sent to locate the missing Hubcap. In October of 2014, Steeljaw helped a small team of Autobots and G.I. Joes to infiltrate Decepticon City, capture Dr. Arkeville, and rescue Typhoon.

In 2014, Scattershot returned to Earth to lead an assault against Decepticon-controlled Autobot City. Afterburner, Lightspeed, and Strafe went instead through the space bridge into Autobot City itself. There they met up with Sandstorm and Steeljaw, and helped deliver the cure to Teletraan II, freeing Metroplex.

5/16/2013: Steeljaw meets with Lifeline of the GI Joes, in order to bring him some important news .

In the Apocalypse World alternative future, Steeljaw was tortured and killed by Soundwave.

This character was once played by Dyliana, but was available for application since December of 2007, during which time he was temped by Bzero. Since April of 2013 he's been played by Whitedagger.