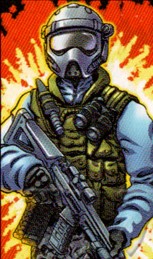 Steel Brigade troopers are the backbone of the G.I. Joe fighting force. The "grunts" of the team, they are chosen from the Greenshirt forces for their exceptional dedication and skills. They work hard to hone their skills so that they can move up the ranks into specialized positions. They meet every challenge with determination and enthusiasm, and eagerly go on missions where they can watch and learn from their superiors. The Steel Brigade Delta team members are mobile battle experts specializing in vehicular combat.

The Steel Brigade was first organized in 1987 to counter the better trained and equipped Vipers.

The Steel Brigade act as troopers for G.I Joe missions. In 2011, a team of them were specially trained in vehicular combat to act as drivers for the Joe team.

Steel Brigade are the counterparts of Cobra's Vipers in the same way that Greenshirts counter Cobra Troopers.

Steel Brigade Delta are available to any player as Disposable Characters -- a quick, brief app, and you, too, can play a faceless Steel Brigade!

They're also available as Original Characters if you'd like to create a more lasting, fleshed-out Steel Brigade Delta.