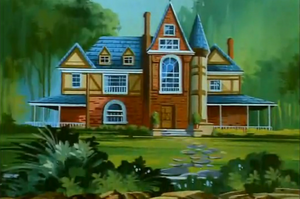 The Starlight House for Foster Girls was the first house where the Starlight Girls and The Holograms lived in up until it was destroyed in a fire that was the product of a staged burglary gone wrong.

The building was actually the Bentons' family own house and the place where Jerrica and Kimber were raised. Due to the decision of its owners, Emmett and Jacqui, to start adopting homeless girls from around the country, the house gained the moniker of "Starlight House" ("Starlight" being a name used on all of the Bentons' properties). The first girl to be adopted was Aja, with Shana, Lela and Becky following later.

A long time employee of the Bentons, Mrs. Bailey, helped in its day by day household duties, as well as taking care of the girls' needs. She was also being in charge of some of its financial accountabilities.

After Jacqui's death, Emmett continued her wife's legacy by adopting more homeless girls, until his own death in the early '80s. The house was then inherited by his two daughters, Jerrica and Kimber, who continued running the house with help from Mrs. Bailey.

Under Eric Raymond's orders, a man named Zipper robbed the house, accidentally knocking over a candle while trying to escape and setting the building ablaze, destroying it completely. Fortunately, thanks to the good heart of a wealthy businessman named Howard Sands, the girls were allowed to move temporarily to a mansion he was offering as grand prize for a music contest.

After the Benton girls, along with their new formed band, managed to officially keep the property for themselves by winning the contest, the mansion, which from that day on was known as the Starlight Mansion, became the new base of operations of Starlight House and both terms are used indistinctively to refer to the same building.

The original house was situated in what appears to be the middle of the woods.