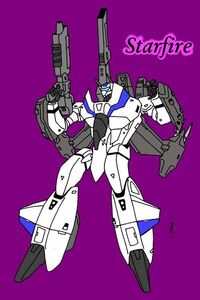 Easily being a contender for one of the fastest Decepticons alive, Starfire was created from the same prototype that made Jetfire, his arch-nemesis. Although vastly modified, he still suffers from the same experimental (and therefore, unreliable) technology of the original prototype. When in space, Starfire consumes quite a lot of fuel, which, if he's not careful, can leave him stranded. In jet mode, he has an inverted wing design, allowing him to fly at speeds up to Mach 5. With a set of extra fuel tanks and independent rocket boosters, he is able to whip himself around Earth's gravity and fling himself to space. It's a rather dangerous 'slingshot' move, but he generally doesn't care. In space, he can kick in his FTL engines and fly at speeds of Mach 25. During combat, he has three modes to choose from, all sporting an impressive payload. On the back of his jet mode, he carries a pulse cannon with a range of 200 miles. Along his wings are a variety of missiles from air-to-air to air-to-ground, and Starfire carries a large plasma rifle in robot mode. Starfire's limited programming tends to leave him unimaginative in combat, and easily outfoxed, for all his formidable weaponry.

Starfire was created from the same prototype as Jetfire, but exchanging intelligence for even greater speed. His programming is limited in hopes that unlike Jetfire, Starfire will remain loyal to the Decepticon cause.

Starfire currently patrols the inner planets of the Sol system.

Starfire was a second attempt by Shockwave to create a loyal successor to his failed Jetfire project.

Starfire is played by his creator.