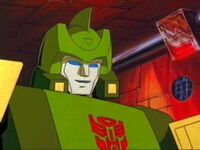 Springer is a wise-cracking, easy-going, sharp-witted and somewhat caustic fighting Autobot. He has an unfailing optimism, good humor, and courage beyond known bounds, and with it the willingness to sacrifice himself for his friends and the sake of his mission. Springer has an incredible springing power, enabling him to leap great distances by using the strength in his mighty legs. His physique is heavily powerful, his chest massive, his arms enormous and well-proportioned like the most dedicated body-builder. When he transforms, his automotive mode is super-powerful, with the attributes of both battle tank and speedcar combined. In robot mode, he carries a laser that produces giant wind funnels. His helicopter blade transforms into a light saber that can cut through 2 foot concrete effortlessly.

After the Decepticons overtook the Autobots' main base and following the death of Ultra Magnus, Springer issued a direct challenge to Bumblebee's leadership, imploring the gathered Autobots to vote "no confidence" in Bumblebee's leadership and install Springer as interim leader. He vowed to begin using Decepticon tactics and begin a campaign to instill terror in the Decepticons' psyche by conducting small, but deadly raids. While he had the support of the senior Autobot leader Hot Spot, Springer's initiative ultimately failed (263 voted "No Confidence", 327 voted against). Despite losing, Springer vowed to support Bumblebee and ordered all of his followers to follow his lead. In a gesture of solidarity, Bumblebee promoted Springer to City Commander, the position once held by the deceased Ultra Magnus.

In 2017, Springer went on a vision quest within the Matrix and returned humbled and with greater respect for the sacrifices of Optimus Prime.

Springer is being temped in Con World by SpikeWitwicky.